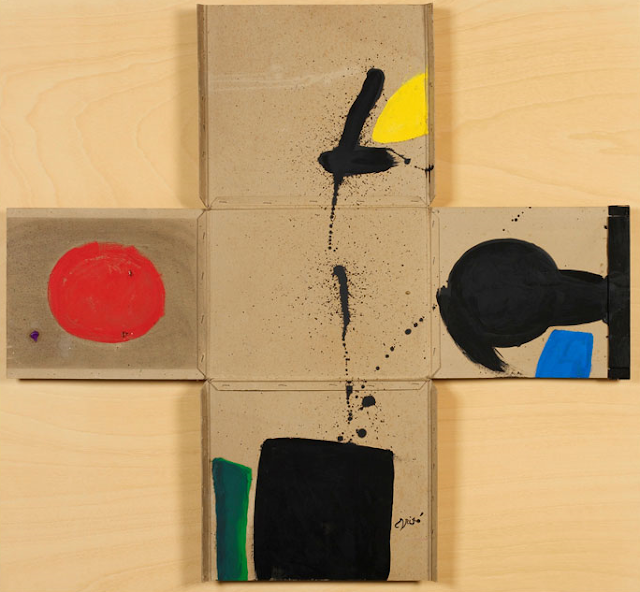 Joan Miró, Dona i ocell davant el sol, Joan Miró, 1976 © Successió Miró.
“Popular art always moves me. There is nothing tricky or phoney about this art. It goes straight to the point. It surprises, and it is so rich in possibilities,” Joan Miró told Yvon Taillandier in the 1950s. The artist's interest in popular culture, but also in elements of the natural, rural environment led him to become an avid collector of objects.

Joan Miró. The Poetry of Everyday Life highlights a new way to perceive art based on Miró's capacity to discover poetic possibilities in the simplest of objects. With 14 paintings, 16 sculptures, 4 drawings, 19 objects, 2 sobreteixims and a film, the exhibition focuses on the artist's work in the 1960s and 1970s, a period in which, in seeking to revise his work, he adamantly challenged painting, while he also worked prolifically with bronze sculpture.

The exhibition reveals the great importance of everyday objects in Miró's output of sculptures, paintings, drawings and textile art, while it also testifies to his social commitment and work inspired by the idea of freedom in times of oppression through the medium of lithographic printing. The posters on show belong to the Nils Tryding collection, one of the most comprehensive in the world. These were donated by the owner to the town of Kristianstad.

The exhibition is divided into five sections based around the artist's relationship with what he perceived as everyday. In the first section, there are a number of objects in their original condition, which Miró found and kept in his studio. He used these as the starting point for his sculptures and paintings. In his quest to go beyond painting, objects served as a stimulus to Miró's creativity as an artist. A towel, a hatbox, a detergent bottle, a stone and a pumpkin are just some of the elements observed by the artist which inspired a poetic interpretation.

The second section presents a selection of paintings and bronze sculptures. Miró explored new processes and materials alien to art, as he continued to challenge traditional painting and reject its illusionistic role. Meanwhile, his conception of sculpture – formed by objects of diverse origin fitted together – was that it should be integrated into nature. On many occasions, sculptures could even become monuments and take their place in the public space, forging a close relationship with society.

Joan Miró also made use of craftsmanship techniques in his bid to transcend painting. In the third section of the exhibition, visitors will find two sobreteixims, works made with a base of jute and hemp weave, to which all kinds of objects are attached, making the pieces three-dimensional, in combination with pictorial gesture and, on occasions, the controlled action of fire. With these pieces, the artist set out to highlight the material purity of the work, showing it as an integral part of the reality he sought to represent.

The fourth section of the exhibition Joan Miró. The Poetry of Everyday Life turns to the medium of the poster in order to focus on Miró's participation in aspects of everyday life, in particular, his support of social, cultural and humanitarian causes. The artist confirmed this commitment in the speech he made when he was awarded an honorary degree by the University of Barcelona in 1979: “I understand the artist to be someone who, amidst the silence of others, uses his voice to say something, and it is required that this thing should not be useless, but something that offers a service to man.”

The exhibition concludes with an area devoted to Miró's intervention in Barcelona's public space in collaboration with the young architects of Studio PER in 1969. This painting, done in graffiti style above the large windows of the building belonging to the Association of Architects of Catalonia and the Balearic Islands, served to draw attention to the exhibition Miró otro, which demonstrated the artist's political commitment and the transgressive nature of his work. This exhibition ended up becoming a counter exhibition to the major retrospective on the artist that had opened at the Antic Hospital de la Santa Creu at the end of 1968. When the exhibition ended, this painting was destroyed, but not before sparking considerable debate over its preservation and the commercialisation of art.

Joan Miró gave the Studio PER architects who had participated in the action the signed, dedicated sketch of the mural. To coincide with the 40th anniversary of the Fundació Joan Miró, they formalised the donation of this drawing. In the final section of Joan Miró. The Poetry of Everyday Life, we find the projection of the film Miró, l’altre, by Pere Portabella, with original music by Carles Santos. The film documents this artistic action, showing part of the creative process and the subsequent destruction of the work.

Prins Eugens Waldemarsudde is one of the most popular art museums in Sweden with varied and extensive exhibitions and events. It is located in Stockholm in what used to be the residence of Prince Eugens (1865-1947), an artist and an important art collector. The original furniture and paintings can be viewed on the ground floor in the mansion while the upper floors and an adjacent gallery are home to the permanent collection and temporary exhibitions. In 1947, Prince Eugens gave Waldermarsudde and his collection to the Swedish state.