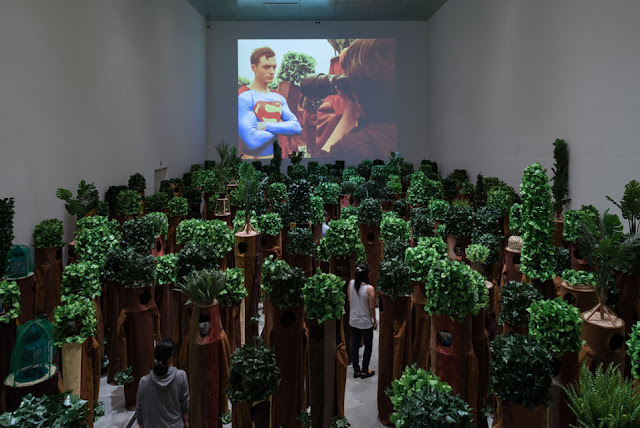 In Japan, Taro Izumi is a singular artist. He has developed a world which is expressed in installations, sculptures and videos, whose appearance processes are associated with accidents, play or perturbation.

The installations that he constructs from ludic hypotheses are a source of forms, sculptures and murals which, often thanks to their absurdity, become extraordinarily unexpected items that humorously thwart our artistic and social customs. For example, the invention of mounts composed of everyday elements – chairs, tables, stools, cushions – which are rapidly assembled so as to welcome a body imitating the vigour of a sportsman in action, leads to something which is at once astonishing, a parody of the dream bodies of stadium heroes and a fascinating commentary on the history of the plinth in sculpture.

In a context such as Japan, which is quite normative because of its culture and its social organisation, the turbulence of reality, unexpected noises, paradoxical behaviours, and the performed situations that Taro Izumi presents, all create the impression of having been produced by wicked spirits that meddle with our lives and make fun of our customs.

“In the Shinto religion of Japan, some kamis or venerated natural spirits play this same role as occasionally dangerous tricksters. They slip into familiar spaces and make havoc of our lives and habits, and this is just what Taro Izumi, trickster-artist, “enfant terrible”, conceptual rogue, does while deliciously imagining that everything could be so different.” --Jean de Loisy

Born in 1976 in Nara, Taro Izumi lives in Tokyo. His work has been featured in several solo shows, in particular at Ongoing, Tokyo (2015), The National Museum of Art, Osaka (2014), Nassauischer Kunstverein, Wiesbaden (2014). The Hara Museum of Contemporary Art, Tokyo, and the 21st Century Museum of Contemporary Art, Kanazawa, Japan, are also exhibiting his work in 2017. He has appeared in a large number of group exhibitions, such as “Une forme olympique”, HEC – Espace d’Art Contemporain, Jouy-enJosas, France (2016); “Voice of images”, Palazzo Grassi – Fondation Francois Pinault, Venice, Italia (2012); “Waiting for Video: Works from the 1960s to Today”, The National Museum of Modern Art, Tokyo, Japan (2009); “Between Art and Life, Performativity in Japanese Art”, Centre d’Art Contemporain, Geneva, Switzerland (2008); “Out of the Ordinary: New Video from Japan”, MOCA, Los Angeles, USA (2007); “After the Reality”, Deith Projects, New York, USA (2006). His artworks are part of several major collections, including those of the Museum of Contemporary Art, Tokyo, the Fondation François Pinault, the Kansas Spencer Museum of Art, the Conseil Général de Seine-Saint-Denis, the Fonds Municipal d’Art Contemporain de la Ville de Paris and the Fondation Kadist.

“While video images cannot be transformed, I can always shake them up. I try to made pieces you can touch. When I press on the ‘play’ button, images then appear like ‘zombies’.” --Taro Izumi