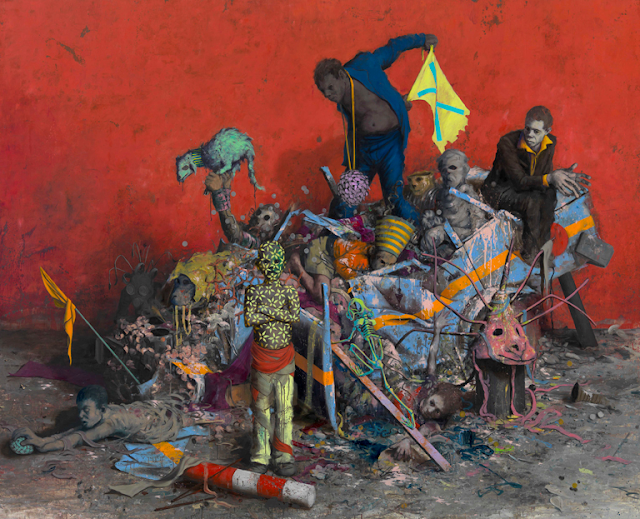 A master of imaginative figurative painting, with each brush stroke Burgert creates carefully constructed scenes filled with complexity. His works depict his vision of the theatre that is human existence, examining the instinctive need for humans to give sense, direction and purpose to their lives. This exploration encompasses realms of reason, imagination and desire, generating monumental landscapes crowded with fantastic figures of different proportions: monkeys and zebras, skeletons and harlequins, Amazons and children.

These dynamic pictorial dramas generate a strong sense of unease in the viewer: the subjects depicted wear masks and costumes, walls and floors split open to reveal piles of bodies or liquids, while an inexplicable darkness looms everywhere.

Referenced in the exhibition’s title, the plumb line is a symbol of inner balance and a motif that appears frequently in Burgert’s paintings. Compulsively plumbing our reality is something of an obsession for the artist. He chooses to examine existential questions with his paintings and does not shy from venturing into dark corners to explore our emotions, obsessions and demons. The viewer is confronted with a chaotic world that echoes the confusion and anxiety of current events and leaves them without any grounding. His aim is to push at the limits of personal knowledge in order to strengthen our reasons for being in the here and now and restore one’s centre of gravity.

The works that are on display at MAMbo consist of both monumental canvases which provide space for sprawling narratives of compositional complexity and smaller paintings which focus on the study of individual subjects, portraits that push the figures portrayed into the foreground, as if under a microscope.

The exhibition is part of the fifth edition of ART CITY Bologna, an institutional program of exhibitions, events and cultural initiatives developed jointly by the City of Bologna and BolognaFiere. During Arte Fiera, it offers new opportunities to discover and learn about artistic heritage through a dialogue with contemporary art.

Lotsucht / Scandagliodipendenza is accompanied by a detailed catalogue published by Edizioni MAMbo featuring critical texts and images of all the works in the exhibition, as well as a selection of other works by the artist.

Jonas Burgert was born in 1969 in Berlin, where he lives and works. His principal solo exhibitions include: Jonas Burgert, STÜCK HIRN BLIND at Blain|Southern in London (2014); Schutt und Futter at the Kestnergesellschaft in Hannover (2013), Gift gegen Zeit / Poison Against Time, at Blain|Southern in Berlin (2012); Jonas Burgert Lebendversuch, at the Kunsthalle in Krems and at the Kunsthalle in Tübingen (2011 and 2010); Zweiter Tag Nichts at the MCA in Denver, Promenade Space (2008)