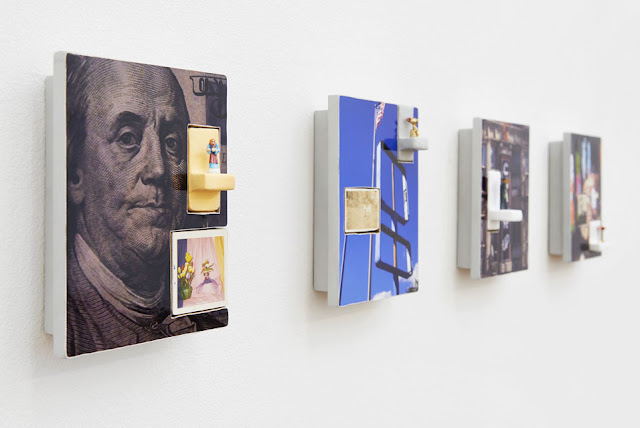 Sadie Benning, installation view Shared Eye, Kunsthalle Basel, 2017. Photo: Philipp Hänger.
Videos are what Sadie Benning first became known for; they won the then-teenage artist awards and visi- bility throughout the 1990s on the experimental art and video circuit. Lo-fi and black and white, they explore aspects of memory, identity, and the anxiousness of growing up queer in the Midwestern United States. “I got started partly because I needed different images and I never wanted to wait for someone to do them for me,” the artist once explained in an interview. Improvising with materials at hand and a toy camera, the adolescent Benning constructed fragmented, highly personal moving images, portraying the artist amid everyday objects, drawings, and scraps of handwritten text.

More than two decades later, the homespun poetics, grainy images, and durational logic explored in these earlier video works has expanded and taken on quite a different form as it confronts the political, conceptual, and material concerns of another moment in history. This exhibition, the artist’s first institutional solo show in Europe, is a collaboration between Kunsthalle Basel and The Renaissance Society in Chicago. It is also the first institutional exhibition to focus on the importance of what are often referred to, for lack of a better term, as the artist’s “paintings.”

Entitled Shared Eye, the presentation consists of a new series of fifty-five panels. Each is composed of mounted digital snapshots taken with the artist’s smartphone, embedded with painted aqua-resin elements and found photographs (drawn from a variety of sources, from Internet-found images of strangers to 1960s newspaper telefax images), occasionally punctuated by miniature toys or inexpensive keepsakes nestled upon tiny sculpted shelves. There is a felt intensity to the labor involved in making each piece, and a decided (willfully imperfect) hand detectable in the rough-hewn forms, sanded edges, and incorporated elements. A nervous pic- torial energy is built up through this process, and inexplicable connections emerge among a work’s different elements.

A gathering of protesters, the artist’s own vinyl collection and bedroom, a film still from Citizen Kane, a desolate alleyway, Benjamin Franklin’s visage on a US banknote, a miniature calendar, a toy robot, Ku Klux Klan members marching together: these describe just some of the images, objects, and re- ferences embedded in the works. They juxtapose the intimate and the anonymous, the digital present and an indeterminate analog past, the miniature and the extreme close-up, putting viewers in front of Benning’s highly personal response to the state of the world at a moment of deep political uncertainty. They are also imbued with the charge of what has come before and what is yet to come, since each piece, the artist attests, “serves as a visual represen- tation of the past, the present, and the future, colliding.”

The resultant pieces hover between mediums, defying easy categorization, acting simul- taneously as drawings, sculptures, photo- graphic works, and even paintings. When speaking of them Benning persistently evokes film editing techniques, and it is tempting to read this show as a kind of film loop. The rhythm of the display is inten- tionally cinematic in nature, mimicking the cuts, pans, fades, pauses, and staccato transitions of time-based media. Here, meaning is produced not only from within the composition of each still image-panel and the dialogues between them (notice how in the first room the found photograph of the “person with package” in that eponymous work seems to walk toward the figures in Crosswalk). Meaning is also built through the spacing and the deliberately vacant areas in the exhibition, like leader punctuating a film. Notice how in the first rooms the spacing is wide and blank wall spaces are abundant, like the start of a film in which clues are being left, a scene set, a mood established. By the end, the pace has quickened and the density of arrangements and flicker of images becomes more intense, even willfully aggra- vated. The experience of the ensemble is thus spatial and textural, but also temporal.

Since the first galleries are seen twice—upon entering and exiting the space—Benning conceived the pieces in rooms 1 to 3 as both a prologue and an afterword to the core of the exhibition: an installation that bears the title of the show itself, Shared Eye. The last two galleries, rooms 4 and 5, contain an in- stallation made in response to the 1976 series of paintings To the People of New York City by the late German artist Blinky Palermo. Made shortly before Palermo died and never exhibited in his lifetime, To the People of New York City left an impact on Benning. Palermo’s installation is composed of forty seemingly nonrepresentational paintings, presented in a rhythmic pattern of different scales and proximities, and arranged in fifteen sequences for which he left annotated sketches. Benning’s installation uses the frame ratio of each panel of Palermo’s series as well as the same total number of panels and grouping arrangements, appropriating the late artist’s idio- syncratic specifications. There is no intentionally overt relationship between the content of Benning’s and Palermo’s works, but in their mathematical connection (or “mathematic mania,” as Benning puts it), there is a numerology that quietly binds them. And in so doing, Benning highlights the ways that we insert our own histories and ideas into the frames we encounter.

The title Shared Eye evokes the idea of seeing as an ongoing collaboration between individuals, which cannot be extricated from its many, often conflicting, sources. These works emphasize how rampant capitalism and its adjoining structures of patriarchy, misogyny, racism, and xenophobia inform the subconscious—redirecting the imagination and one’s sense of what is true. The body of presented work was designed to draw attention to how we experience, collectively and alone, and each piece functions individually and as part of the larger group. Cumulatively, the show is meant to generate the fragmented, filmic quality of memory and dreams, inviting a distinctive response in the viewer who encounters them. The body and the mind complete each work.

Sadie Benning was born in 1973 in Madison, USA; the artist lives and works in New York, USA.