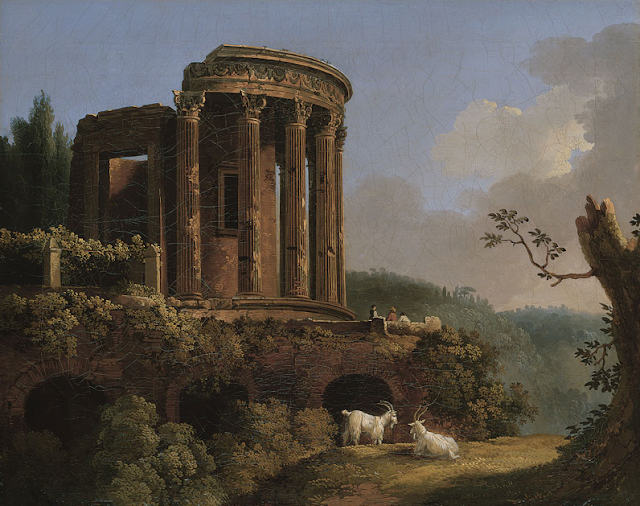 Jakob Philipp Hackert, Tempel der Sibylle bei Tivoli.
During the 19th century, Italy was a magnetic destination for many travellers from Northern Europe, including artists such as Carl Blechen, Camille Corot and William Turner, Oswald Achenbach and Max Klinger. In Germany, Johnann Wolfgang von Goethe fuelled the compulsion to head South with his "Italienische Reise" ("Italian Journey"), published in 1816/17 for the first time.

"Italian" was the word Heinrich von Kleist used in a letter to describe the blue sky over Dresden, thereby expressing a deeply rooted yearning for the bright light of a country which, in equal measure, cast a spell with its ancient and Christian historical sites, its wealth of Renaissance art and its landscapes. The city of Rome became an artistic focal point in this context. Artists of various nationalities hoped to find impulses that would give direction to their creativity here.

The exhibition "Beneath Italian Skies. 19th-century paintings of Italy between Claude Lorrain, Turner and Böcklin" in the Albertinum in Dresden traces this enthusiasm – which has continued uninterruptedly to this day – for the "land where the lemon trees bloom". With 130 works, the exhibition provides a comprehensive overview and invites its public to take a visually powerful journey through the bel paese. The rich holdings of the Staatliche Kunstsammlungen Dresden are the focal point here. Numerous paintings have been restored for the exhibition and can now be seen for the first time anywhere.

The presentation takes place in the context of paragons from the Gemäldegalerie Alte Meister and ancient and 19th-century sculptures from the Skulpturensammlung. At the entrance, visitors are immediately greeted by the painting "Coastal landscape with Acis and Galatea", completed in the mid-17th century by Claude Lorrain, who turned landscape painting into a leading genre and, alongside Nicolas Poussin, set the standard for many artists over several centuries to come. An impressive panorama of varied images of Italy follows, from the epochs of Classicism and Romanticism (Julius Schnorr von Carolsfeld, Ernst Ferdinand Oehme, Ludwig Richter, Carl Blechen), through to the currents of Realism, in which the Arcadian dream gradually gives way to an increasing engagement with reality through a conception of nature based on studies completed in the open air (Oswald Achenbach, Adolph Menzel). The so-called German-Romans, by contrast, drew closely on the art of antiquity and the Renaissance in the second half of the century (Arnold Böcklin, Anselm Feuerbach, Hans von Marées). The sequence of artistic positions thus provides an insight into the changing world as it moved from agrarian culture to industrial landscape, from the early development of tourism by coach or foot to steam ship or train in the late 19th century.

In this context, works by German-speaking artists are in dialogue with the works of outstanding contemporaries such as Camille Corot, Johan Christian Dahl and William Turner. Their paintings shaped the expectations and attitudes of many generations of travellers to Italy. The paintings take visitors on a journey through a land of lush vegetation and striking wastelands, Mediterranean climate and intense light, capable of inspiring anyone’s wanderlust and imagination.

At the end of the exhibition, the focus shifts to the fascination for Italy in the present and visitors become part of the exhibition themselves. A panorama of highly individual and contemporary holiday impressions is created through a photo campaign aimed at visitors.

The exhibition combines valuable works that are on loan from the Tate in London, Thorvaldsens Museum in Copenhagen, the Berlin State Museums, the Bavarian State Painting Collections in Munich and the Städel Museum in Frankfurt, among other places.

A broad-based education and communication programme has been designed for visitors of all ages. Themed guided tours and workshops specifically for kindergartens, schools and families, groups and individual visitors convey the 19th century’s fascination with Italy. There are various formats to choose from, depending on the target audience: a lecture by Florian Illies, for example, a film evening with a showing of the legendary film "Go Trabi Go" in the presence of its star Wolfgang Stumph, a promenade concert with the Vocal Concert Dresden ensemble or a literary voyage of discovery, followed by a writing workshop for school students.