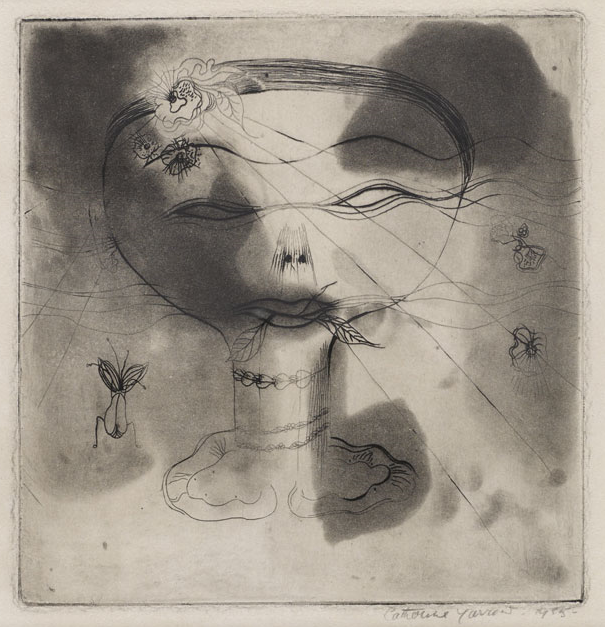 Catherine Yarrow, Head with Insect, 1935. Scottish National Gallery of Modern Art © Catherine Yarrow Estate.
A selection of artworks and texts created by members of four women’s groups based in Edinburgh and Glasgow will be unveiled in a new display at the Scottish National Gallery of Modern Art this week. Call & Response: Women in Surrealism, which has been organised in partnership with the Glasgow Women’s Library (GWL), will present responses to the work of women artists - such as the famous American photographer Lee Miller and the British artist Eileen Agar - who were at the heart of the Surrealist art movement in the twentieth century, and whose own works from the SNGMA Archive will be displayed alongside that of the women’s groups and of contemporary artist Stephanie Mann.

In a series of workshops held between August and December 2016, members of the groups Sikh Sanjog, Shakti Women’s Aid, Seeing Things and Bonnie Fechters looked at works in the SNGMA’s world-renowned archive of Surrealist and Dada material before going on to write and create artworks of their own, using a range of techniques favoured by the Surrealists.

Surrealism was one of the most radical movements of the twentieth century, which challenged conventions through the exploration of the subconscious mind, the world of dreams and the laws of chance. Emerging from the chaotic creativity of Dada (itself a powerful rejection of traditional values triggered by the horrors of the First World War) its influence on our wider culture remains potent almost a century after it first appeared in Paris in the 1920s.

Although male Surrealists such as Salvador Dalí and René Magritte are well known today, many hugely influential women artists, who were a vital part of the movement’s activities, are frequently overlooked. The Surreal Encounters exhibition held at the SNGMA in summer 2016 provided the opportunity to look at these artists and the project proceeded from discussions around works in the show.

Surrealism drew upon theories of psychoanalysis developed by Sigmund Freud - specifically the idea that our memories and most basic instincts are stored in a layer of the human mind he called the unconscious - and sought to explore these through writing and art. Participants in the Call and Response workshops were encouraged to create artworks using a range of Surrealist techniques, among them ‘decalcomania’. This involves pouring ink or paint onto the surface of a piece of paper, pressing onto another sheet, and then using the resulting patterns to suggest unexpected objects, figures or landscapes.

Responses were also encouraged through automatic writing and word games, which are designed to capture the voice ‘unedited’ by conscious thought. The Surrealists relied on these techniques as ways of tapping into our intuitive feelings about the world around us, our hidden emotions and life experiences.

The project is part of the Gallery’s Public Engagement Programme and follows on from a collaboration with GWL in 2015-16 on a project around then then current exhibition: Modern Scottish Women: Painter and Sculptors 1885-1965.

Sikh Sanjog seeks to inspire and empower Sikh and other Minority Ethnic women to advance their own life opportunities, through the building of skills, confidence and social inclusion. Shakti Women’s Aid provides support to black minority ethnic (BME) women, children and young people who are experiencing, or who have experienced, domestic abuse. Seeing Things is designed to give women the opportunity to explore cultural events across Glasgow, such as (but not limited to) art, music, theatre or comedy, together with friendly and like-minded women. Bonnie Fechters is an informal group focussed on women’s issues, which organises events to raise funds for women’s causes worldwide, visits to Book Festival and Fringe events and the annual event 'Harpies, Fechters and Quines' event, run in conjunction with City of Edinburgh Library and supported by Glasgow Women’s Library.

Morag Smith, National Lifelong Learning Co-ordinator at Glasgow Women’s Library commented: “One of the Women’s Library’s most important aims is to enable women from different backgrounds to access art and cultural activities. Archives and museums can be intimidating places for many people, but through this collaborative project, the team at the Scottish National Gallery of Modern Art have opened up the treasures of the Gallery’s archive to a new audience and empowered the women involved to take on a new journey of discovery. We are delighted to have been involved.”

Kirstie Meehan, Archivist at the Scottish National Gallery of Modern Art, added: “We’re delighted to open up the Archive in this way, and encourage creative responses to the letters, photographs and publications in the Gallery’s collection. ‘Call and Response’ shows how engaged the workshop participants were with the project, creating artworks and writings in a truly Surrealist vein. This innovative collaboration with Glasgow Women’s Library demonstrated the power of the archive as a living resource, and the enduring appeal of Surrealism for a contemporary generation.”