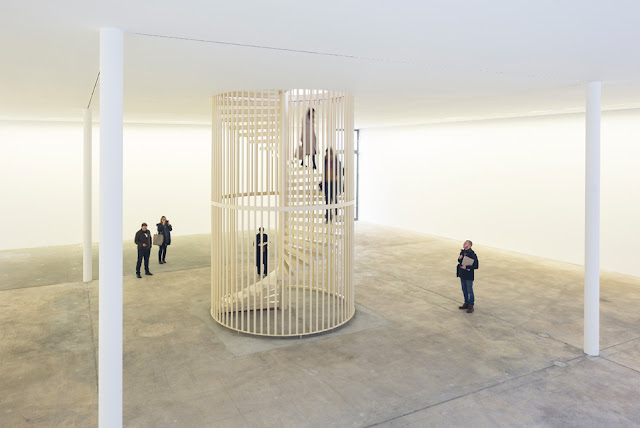 Hanne Lippard, Flesh, 2016, Courtesy the artist and LambdaLambdaLambda, Prishtina.
After the first period of renovation, KW Institute for Contemporary Art announced the inauguration of its new artistic program under the directorship of Krist Gruijthuijsen and the celebration of its 25th anniversary.
ADVERTENTIE
inRead invented by Teads
KW reopens with a series of exhibitions reflecting on the work of South African artist Ian Wilson. Through three corresponding solo presentations by Hanne Lippard, Adam Pendleton, and Paul Elliman, Ian Wilson’s influential practice is revisited as a framework for exploring the roles of language and communication and the broader significance of interpersonal interaction.

Dialogue lies at the core of Ian Wilson’s practice. Focusing on spoken language as an art form, he initially described his work as “oral communication” and later as “discussion”. Language replaces traditional representation as the quintessential vehicle for communication and knowledge. Wilson’s interest in the concentrated moment in which ideas emerge and are formulated in language is a guiding framework for the season. KW views the artist’s oeuvre as a reflection of its own mission: to explore relationships between the viewer and the viewed—or discussed—and the topical urgency of this interaction. To highlight the importance of Wilson’s practice, artists have been invited to concentrate on different aspects of his body of work and either incorporate them in their exhibitions or take them as inspiration for the production of new work.

Norwegian artist Hanne Lippard kicks off the new program with a visually pared down yet spectacular new work entitled Flesh that takes its inspiration from Wilson’s Statements and Circle Works. The immersive installation takes up the entire hall on the ground floor of the KW building and confronts the visitor with a singular element—a spiral staircase leading to a platform. From here the artist’s voice resounds, completely encompassing the audience and opening up a world in which our experience of language as pure voice is explored, shaped, and broadened. Over the past few years, Lippard has focused on the production of language solely through the use of the voice. In her text-based works she employs daily speech and transforms the meaning of words through structural and syntactical repetition.

American artist Adam Pendleton’s exhibition titled shot him in the face occupies the entire floor of KW with one large-scale gesture—a wall that diagonally cuts across the exhibition space. The shape of the wall resembles that of a billboard. The first sentence from the poem Albany by poet Ron Silliman functions as the exhibition’s point of departure. Pendleton appropriates the opening words of the text—“If the function of writing is to ‘express the world’”— and transforms it into monumental work spanning the entirety of the constructed wall. Layers upon layers of Pendleton’s works are also “pasted” onto the wall. These various arrangements, including posters, framed collages, and sculptural objects based on Pendleton’s extensive archival material, incorporate images from various sources such as art history, African independence movements, display systems, poetry, and French cinema—all kept within a consistently black-and-white aesthetic. As a counterpoint to Pendleton’s work, the exhibition includes one of Ian Wilson’s monochromatic paintings, which were created with the conceptual aim of producing distilled, non-referential objects without metaphoric content.

British artist Paul Elliman has consistently engaged with the production and performance of language as a material component of the socially constructed environment. In a world where objects and people are equally subject to the force fields of mass production, Elliman explores the range of human expression as kind of typography. His exhibition As you said includes various works, both existing and new, that test the boundaries of our communication through letter-like objects, language-like vocal sounds, actions, and movements of the body. Whether concealed by clothing or techniques of mimicry, our gestures and the desire for language are always within easy reach of the violently communicative raw material of the city itself. As you said is structured around a set of vitrines devised by Ian Wilson, which Elliman considers as sculptures, objects of display, and sites for discourse. Alongside these vitrines Elliman presents two new bodies of work, one produced in collaboration with the dancer Elena Giannotti.

The constellation of exhibitions presented at KW is consecutively staggered across the different floors of the building. The format allows the exhibitions to be seen in unison but also as separate entities that expand upon each other, framing and interacting with each other through the work of Ian Wilson and through commonly shared sensibilities and concerns. Punctuating the program will be the series Pause, envisioned as a platform for bridging relationships between the past, present, and future. Individual artworks will be presented for a short period of time, up to three times a year. Anthony McCall’s iconic light work Line Describing A Cone (1971) is the first in the series, which is presented in immediate dialogue with Wilson’s circle and disc works from the late 1960s.

In the spirit of Wilson’s practice, an ambitious program of commissioned performances, concerts, lectures, and screenings titled The Weekends will take place in and around KW and throughout the city, with contributions by Nils Bech, CAConrad, Guy de Cointet, Paul Elliman, Coco Fusco, Will Holder, Germaine Kruip, Hanne Lippard, Adam Pendleton, Michael Portnoy, Trisha Brown Dance Company, and Miet Warlop.

The aim of the inaugural exhibition season is to create a multifaceted program that understands dialogue and conversation as profoundly political acts that are the necessary basis for all creative activities and therefore an inherent part of exhibition making. The open-endedness and collaborative nature of dialogue renders an intrinsically inclusionary strategy, allowing for a plurality of voices and narratives to unfold. The notion of language will be continuously explored throughout the artistic program in order to emphasize the institution’s goal of experimenting with communication and exchange—no longer as the stable common grounds of a traditional value system but rather as the articulation of many possible parallel narratives. Wilson’s emphasis on dialogue, experimental uses of language, and the collective experience of art through spoken exchange between artists and audiences, in Berlin and beyond, is a significant aspect of the future program of KW, even beyond this season.

In parallel with its exhibition program, KW is continuing to push beyond the confines of its physical building through commissions, events, and its education program. Commissions take various forms: Felix Gonzalez-Torres’ “Untitled” (Chemo) (1991), a curtain made of beads at the entrance into the exhibition spaces, invokes a generic form of hospitality that corresponds with Philippe Van Snick’s recent intervention Dag/Nacht (1984–ongoing) at the entrance gate but also a new sound commission by Paul Elliman and the reinstatement of the KW Garden by atelier le balto. In addition, the legendary Pogo Bar is being re-established at KW with a new design by American artist and designer Robert Wilhite. It presents weekly, one-night-only events conducted by artists and creative individuals. Bob’s Pogo Bar will open to the public on January 19, 2017 with a performance by the Netherlands-based artist Nora Turato. Bob’s Pogo Bar follows the format of Bob’s Your Uncle, a bar that was hosted by the Kunstverein Amsterdam from 2014 to 2016.

The new series titled A year with offers time for detailed investigations into design and publishing practices in the arts, developed over the course of a year. For 2017, British typographer Will Holder investigates his practice by inviting guests to collaborate and use his archive of publications from the past two decades as a starting point. Prospectus: A Year with Will Holder follows the exhibition Sorry! NO We Don’t Do REQUESTS, which was presented at Kunstverein Amsterdam in the fall of 2016. Prospectus: A Year with Will Holder will commence on Saturday, January 21, 2017 with the launch of a new issue of Holder’s serial publication F.R.DAVID coedited with Riet Wijnen and with KW as its new copublisher.