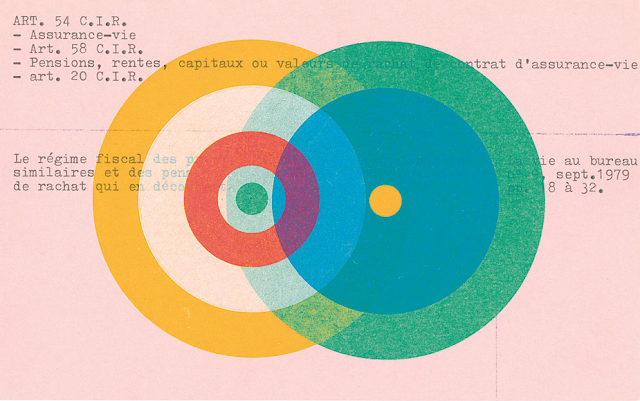 Karel Martens, Untitled, 2016. Letterpress monoprint on found card, 8 x 5 inches. Courtesy the artist and P!
Karel Martens has ten hands for every finger. He’s an artist, a typographer, a graphic designer, a bookmaker, and an educator. He co-founded a school. He’s synonymous with overprinting. He’s a method.

That said, Motion is appropriately dexterous and tentacular – comprising an experiential exhibition of Martens’ work within a staircase and three rooms, extending outwards through a series of discursive events in Munich, Amsterdam, Paris, Vilnius, and New York, as well as a publication (copublished with Roma Publications, Amsterdam). Altogether, Motion affords a compound view on an expansive practice, and chart a road map. Yet while all of that spans over 50 years of Martens inter-disciplinary activity, Motion remains grounded firmly in the present (and future).

Of course, the exhibition includes some representative works – overprinted mono-prints, paper reliefs, videos, modular wallpapers, kinetic sculptures, a very early optical work. Consider all of that a contextual substrate that corroborates Marten’s responsive and systematic approach to color, format, type, and material. And his immense influence as an educator is also being centrally positioned within the exhibition, with a selection of publications by his former students displayed on tables Martens designed for the Werkplaats Typografie in Arnhem, NL (the school he co-founded in 1998). Consider all of that a demonstrative charting of his influence. Yet the primary focus is on Martens’ most recent work, with several new commissions – woven textiles, interactive video projections, a massive abstract clock enabled with GPS. These are being produced for the exhibition, while existing works are being specially reconfigured. It is immersive – layered with color inversions over entire spaces, multiplied by real-time mirroring, and attuned with technique, systematic seriality, conceptual operations, and a multi-functional zone.

A tendency to reconfigure also extends to the ambitious new publication Martens is producing with Julie Peeters, which is available. Not for resale – a video comprising approximately 500 images – is being translated into a book form. The image sequences will follow the video’s pacing. Martens is also punctuating the images with new work and unrealized proposals. And all of it, thoroughly indexed.

The publication also fuels an array of satellite events, which will begin in Munich and culminate in New York. Each event is being specifically tailored to the conditions of each venue, and to different aspects of Martens’ practice – from Martens’ influence as an educator (4 February, Kunstverein München, Munich) to the reference material Martens collects and generates around his work (9 February, San Serriffe, the Rietveld Library, Amsterdam), from the unrealized proposals Martens injected into his new publication (17 February, Section 7, Paris) to Martens’ accounting of past and most recent work (24 March, CAC Reading Room, Vilnius). All of this will culminate, openly, in a final event through which the entire Motion project may be discussed and extended, simultaneously (7 April, P!, New York).

In other words, Motion is not intended to display Martens’ practice, but instead to demonstrate his method.

Karel Martens (b. 1939, NL) lives and works in Amsterdam, Netherlands. He is an artist, educator, and graphic designer. He finished as a student at the Arnhem School of Art in 1961. Since then he has worked as an artist and as a freelance graphic designer, specializing in typography. Today he is recognized as one of the most influential practitioners in graphic design. Alongside this, he has always made free (non-commissioned) graphic and three-dimensional artwork. He has exhibited his work internationally, published widely, regularly receives major commissions, and has won numerous awards.