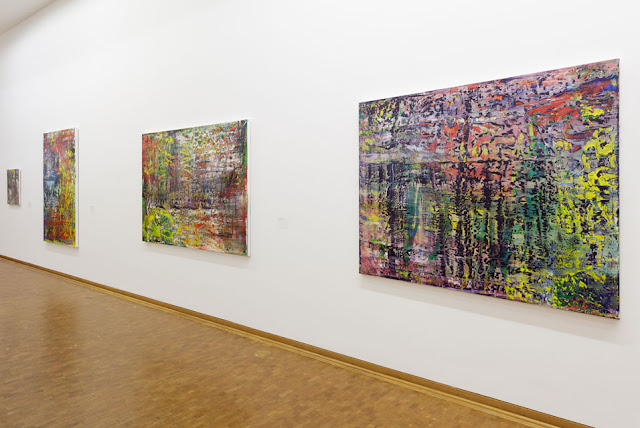 Instaallation view, Gerhard Richter. Neue Bilder Museum Ludwig Köln, 2017. Photo: Rheinisches Bildarchiv Köln/ Britta Schlier.
On the occasion of Gerhard Richter’s eighty-fifth birthday on February 9, the Museum Ludwig is presenting twenty-six abstract paintings for the first time, all of which were created last year. These new works, most of which were painted on canvases of very different sizes, feature bright colors and detailed, multilayered compositions. The artist used a paintbrush, a palette knife, a squeegee, and a knife to shape these paintings built up in several layers of oil paint; his many years of experience—during which he has often made use of chance in the creation of his works—result in detailed and extremely complex compositions. Richter’s work is based on doubts about the representability of reality and the question of the meaning of the painted picture.

Gerhard Richter has worked on a dazzling renewal of painting for over fifty years. The wide- ranging oeuvre of perhaps the most famous artist of our time presents a fascinating tension between figuration and abstraction, significance and banality. Since the late 1970s, abstract pictures have predominated in the work of the artist, who was born on February 9, 1932, in Dresden and has lived in Cologne since 1983.

Alongside the exhibition, pioneering works by Gerhard Richter from the collection of the Museum Ludwig are being presented, including icons such as Ema (Nude on a Staircase) from 1966, 48 Portraits of German intellectual figures from 1971/72, the abstract painting War from 1981, and the glass work 11 Panes from 2003, among others. This presentation, which was also designed by Richter, also features many editions in which the painter further expands his means and his questions about the picture and the likeness. Some of these editions have long been part of the Museum Ludwig collection, while others are gifts that collectors from the Rhineland and the artist himself presented to the museum on the occasion of his eighty-fifth birthday.

Mayor Henriette Reker offers her congratulations to the artist and honorary citizen of Cologne: “Gerhard Richter’s close connection with the Museum Ludwig and the city of Cologne is extremely fortunate. His internationally significant work is created here in our city. I am all the more delighted that his new paintings are also being shown for the first time here in Cologne.”

Cologne’s City Councilor for Cultural Affairs Susanne Laugwitz-Aulbach adds: “On his birthday, we are ultimately the recipients of this gift, and for this we owe him our gratitude.”