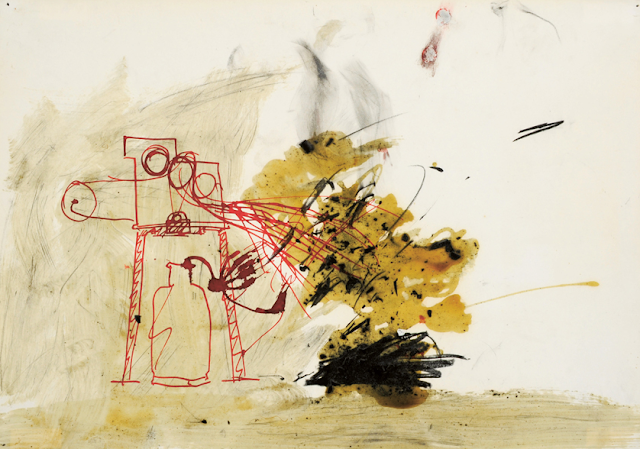 Stephen Cripps. Performing Machines assembles over 200 works by this exceptional artist, including several films, sound works, drawings and collages that together afford a fascinating insight into his unusual, lavishly appointed conceptual world. Cripps’ interest in kinetic sculpture and machines, in fireworks and the poetic potential of destruction as well as in new forms of music resulted in a highly experimental artistic praxis, especially in performative realms. His performances were radical transgressions that owing to the risks they posed for both audiences and the environment would be unthinkable today. Indeed, many of his ideas have survived only as drawings. Until his untimely death in 1982, Cripps’ main focus was on experiments with sound. The Museum Tinguely’s presentation of his cross-media output in an exhibition that is to run from 27 January to 1 May 2017 is a real rediscovery.

Life and Works
Cripps’ artistic praxis eludes categorization, just as he himself intended. He was not the kind of artist to be pinned down to any one medium. In the course of his all too brief career, starting with his training at Bath Academy of Art in Corsham from 1970 to 1974 right up to his premature death in 1982, he built machines and interactive installations as well as staging pyrotechnic performances. He devised kinetic, mechanical sculptures; he performed; he created sound works; he experimented with film; and last, but definitely not least, he produced both collages and drawings. In many of his works he combined these practices. The fleeting, the provisional, and the experimental are all key components of his art. He was thus very much a part of the 1960s project to liberate the arts.

Alone the scope of his artistic ventures is extraordinary, as evidenced by his contemporary rendering of the garden as a place of rest and relaxation in environments punctuated by the din of lawnmowers and barking dogs. With the aid of a helicopter rotor he built a machine that attacked the gallery housing it even as the machine itself broke apart. Cripps also realized installations that called on visitors to be proactive, as in his Shooting Gallery, where they were invited to shoot a cymbal, a xylophone and other sound producing objects with a prepared pistol. To judge by eyewitness accounts, his pyrotechnic performances were multisensory experiences that without a doubt overstepped boundaries, posing a genuine risk not just for the gallery premises but also for the spectators’ life and limb. Cripps worked in places like Butler’s Wharf and the Acme Gallery, which provided space for radical interventions of this kind and generated a climate of artistic collaboration and intense cross-fertilization. Cripps’ close association with Acme meant that following his death, his drawings, notebooks, photographs and letters were passed to them for safekeeping. In 1990, Acme published a monograph ‘Stephen Cripps: Pyrotechnic Sculptor’ and in 2012 passed on Stephen’s work to the Henry Moore Institute in Leeds.

Cripps and Tinguely
Jean Tinguely’s mechanical sculptures and his performances with self-destructing works of art, such as his Homage to New York (1960), were an important source of inspiration for Cripps. Jean Tinguely was even the subject of his degree thesis at art college. There are indeed a number of parallels between Cripps’ works and those of the Swiss artist he so admired. The integration of chance and destruction and the influence of the elements as an aesthetic concept are among the fundamental themes they both pursued.

Exhibition
Cripps’ works were extremely ephemeral and for the most part they no longer exist. Made of fire and light, noise and smoke, they often volatilized at the instant of their realization. Not even the machines ever had the character of an immutable object; they were instead adapted to the prevailing circumstances, and sometimes even rebuilt.

Through its combination of works on paper, audio material, film and documentary media, the exhibition sets out to showcase the hybrid quality of Cripps’ transmedia, multisensory, performative praxis. Drawings and sound recordings, the visual and the acoustic, thus complement each other in a feast for both eyes and ears.

While avoiding strict categorization, the show groups the works thematically, leaving plenty of scope for correlations and associations. The exhibition STEPHEN CRIPPS. PERFORMING MACHINES turns the spotlight on the transmedia character and multisensory quality of Cripps’ oeuvre, even through its focus on the drawings.

The Museum Tinguely will also present some hitherto unknown sound works by Cripps – an artist with a predilection for ‘collecting’ noises ranging from jet engines to lawnmowers. For him, it was all raw material which, inserted in the right place at the right time, supplies a backdrop of sound for his conceptual machine worlds. The cacophonous overlapping generated in this way is fully congruent with the underlying character of Cripps’ works – and with the noisy, at times unbearable, din of the modern, industrial world that we inhabit and that was frequently the starting point for his art.