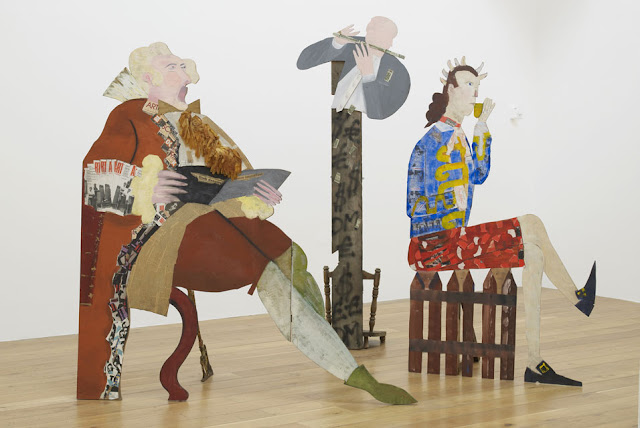 Lubaina Himid, A Fashionable Marriage, 1986. Exhibition view, The Place Is Here, Nottingham Contemporary, 2017. Courtesy of the artist and Hollybush Gardens. Photo Andy Keate.
The starting-point for this exhibition is a pivotal decade for British culture and politics: the 1980s. Spanning painting, sculpture, photography, film and archives, The Place Is Here brings together a wide range of works by more than 30 artists and collectives. The questions they ask – about identity, representation and what culture is for – remain vital today.

In 1982, a group of artists and thinkers met in Wolverhampton at the First National Black Art Convention, to discuss the ‘form, future and function of Black Art’. Two years later, the second ‘working convention’ took place here in Nottingham. What constitutes ‘black art’, or the ‘Black Arts Movement’ was, and continues to be, heavily contested.

This exhibition traces some of the urgent conversations that were taking place between black artists, writers and thinkers during the 80s. Against a backdrop of civil unrest and divisive national politics, they were exploring their relationship to Britain’s colonial past as well as to art history. Many artists were looking to the Civil Rights movement in America, Black feminism, Pan-Africanism, the struggle over apartheid, and the emergent fields of postcolonial and cultural studies.

The Place Is Here does not present a chronological survey. Instead, it is conceived as a kind of montage. For many of these artists, montage allowed for identities, histories and narratives to be dismantled and reconfigured according to new terms. The exhibition assembles different positions, voices and media to present a shifting portrait of a decade while refusing to pin it down. The presentation is structured around four overlapping groupings, each of which is titled after a work on display: Signs of Empire; We Will Be; The People’s Account; and Convenience Not Love.