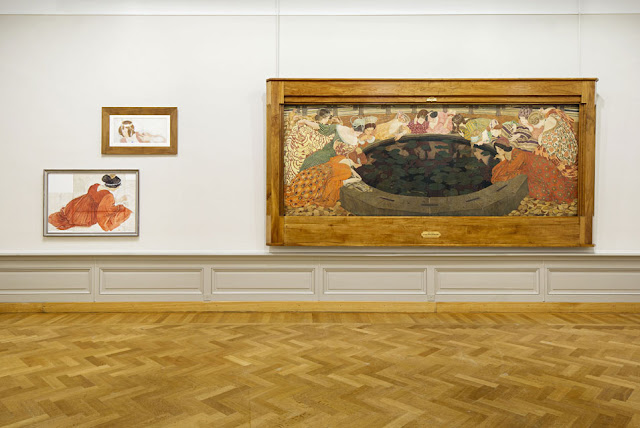 Installation view. Photo: Nora Rupp.
This exhibition shows painters and sculptors engaged in their everyday work. Swiss drawings from the 1780s to the 1950s are presented in three sections – Portfolios, The Path to Creation, Innermost Thoughts – and introduce the visitor to some of the stages in the genesis of a work of art. Academic drawings, projects, roughs, composition sketches and figure studies reveal avenues explored and dead ends sometimes arrived at. The exhibition closes with more personal images bridging the gap between the public and private spheres.

Room 1_Portfolios
Over the years artists build up a stock of works that never leave the studio: drawings from their training years, for example, or unfinished projects. In the first room the visitor finds a portfolio belonging to Émily Chapalay, a young art student in late 19th-century Paris. Big charcoal drawings reveal the classical stages of academic teaching, whose primary aim was the mastery of drawing technique and the inculcation of “taste” through the study of classical models. A second portfolio documents a series of projects prepared by Gustave Buchet for a 1927–1928 advertising campaign for varicose veins stockings. Rising to the challenge, Buchet came up with all sorts of ideas, but none of his big colour pages ever became actual posters and his drawings ended up as minor inserts in the press.

Room 2_The path to creation
The second room offers seven sections dedicated to the genesis of works of art. We see how, in 18th-century Rome, the making of large topographical pictures required a division of labour between landscape painters and figure specialists (Louis Ducros, Giuseppe Mazzola). We are reminded, too, that in the academic tradition of the 19th century, a history painting was preceded by detailed studies from life and squaring-up of the composition (Charles Gleyre, Albert Anker, François Bocion). The quest for the most appropriate images for a big Symbolist painting is retraced through Ernest Biéler’s pencil and watercolour sketches for L’Eau mystérieuse. Paul Robert’s preliminary work for the decoration of the Federal Courthouse in Lausanne, Ferdinand Hodler’s for the big Einmütigkeit fresco in Hanover’s new City Hall, and Rodo’s for the Monument Verlaine in the Jardin du Luxembourg in Paris all illustrate the sheer effort that went into meet large-scale public art commissions as the 20th century dawned. A comparison of Félix Vallotton’s open-air sketches with the summary handling of his landscapes of the 1910s and 1920s, shows just how radically modernism broke with the scrupulous rendering of reality. And last but not least, the drawings of Giovanni Giacometti reveal the influence of Cézanne: the quest for the original subject is abandoned in favour of exploration of the interplay of light and atmospheric colour; now familiar landscapes and portraits of family and friends are all Giacometti needs as a basis for his formal explorations.

The exhibition is on view from February 10 through April 23, 2017 at the Cantonal Museum of Fine Arts.