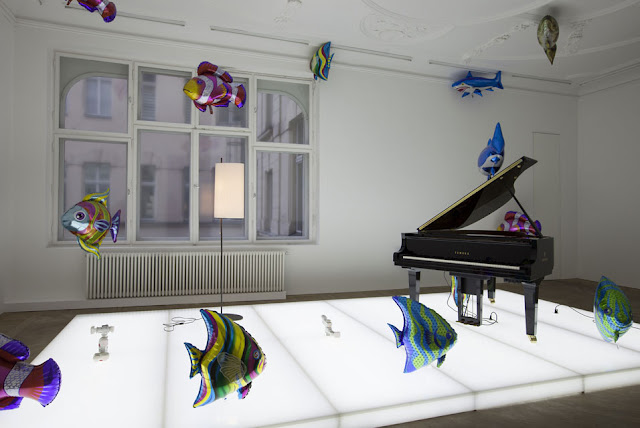 The exhibition is structured on the mathematical model of the fugue, and conceived around the idea of the counterpoint, or ritournelle, a principle, whereby a particular passage is repeated at regular interludes within a musical arrangement to create compositional meaning. Governed by a similar method, A Time Coloured Space is determined not by its ‘objects’, but by the regularity and rhythm of their appearance, featuring some of Parreno’s most emblematic work dating back to the 1990s.

Throughout his practice, Parreno has redefined the exhibition experience by exploring its possibilities as a coherent ‘object’ and a medium in its own right, rather than as a collection of individual works. To this end, he conceives his exhibitions as a scripted space in which a series of events unfold. Placed within the philosophical framework of Giles Deleuze’s Difference and Repetition (1968), each of the exhibition’s thirteen rooms is a recurrence of the last, differentiated only by variations in color and arrangement. By introducing these recurring variables, Parreno takes the Ritournelle principle beyond its musical understanding to what Deleuze described as ‘a repetition of the different’. As the past and the future are inscribed into the present, the exhibition becomes an automaton, a factory in which to engineer these variables, and a form of imitation becomes a new invention.

Among the works included are Parreno’s Speech Bubbles (1997 and ongoing), helium-filled balloons in the shape of cartoon speech bubbles. Empty of words, they congregate and hover on the ceiling of the space they inhabit. Also returning is Fraught Times: For Eleven Months of the Year it’s an Artwork and then December it’s Christmas (2008-2016), an ongoing series of aluminium sculptures cast as snow-covered Christmas trees.

More than 180 of Parreno’s ink drawings, created between 2012 and 2015, will also be on display. The drawings form the basis of the filmic animation: With a Rhythmic Instinction to be Able to Travel Beyond Existing Forces of Life (2016), a perpetual Danse Macabre controlled by an organic cellular system that will be projected in the Serralves Auditorium as a Cinéma en Permanence.

A series of light objects: AC/DC snakes and Happy Ending Lamps will also punctuate the space.

A recent addition to the Serralves Museum’s permanent collection, Quasi Objects: Marquee (cluster). Disklavier Piano. My Room is a Fish Bowl (2014), serves as the exhibition’s master of ceremonies.