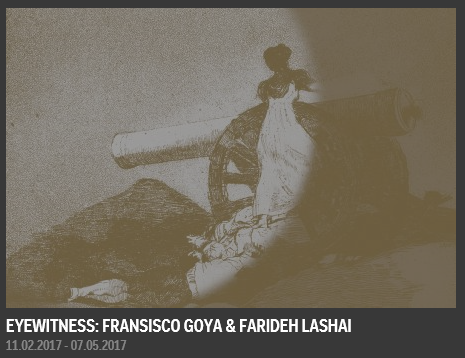 In 2016, the MSK welcomed 137,132 visitors. With this record year, the museum continues the positive trend that began in 2015. Catherine de Zegher, director, says: “It’s clear that ‘The Open Museum’ is growing: as a social meeting place for old and young, as a museum with a focus on art from the past and the present, and as a place of reflection on art, beauty and society. In February, we open the Goya / Lashai exhibition, which connects the present with the past in the fight against injustice and pain ... Whoever visits the museum in the weeks leading up to the opening might encounter the Iranian artist Parastou Forouhar making a work in situ.”

During the spring of 2017, the MSK brings together two artists in the newly established Drawings Cabinet. The exhibition Eyewitnesses links the social criticism of the Spanish artist Francisco Goya (1746-1828) to the social commitment of the Iranian artist Farideh Lashai (1944-2013), in a shared indictment against violence and oppression.

In 2015, the MSK acquired a copy of Los Desastres de la Guerra (The Disasters of War) by Francisco Goya. This series of engravings depicting the horrors of war was created between 1810 and 1820, during the Spanish War of Independence against the Napoleonic occupation. It was never shown by Goya during his lifetime.

Working in an era of war and oppression, Goya explicitly broke away from the bombastic rhetoric of classical painting: instead of glorious heroes he depicted ordinary citizens struggling to survive during the war. The cycle is considered a universal indictment against all forms of violence.

The Iranian artist and writer Farideh Lashai also worked in a time of conflict and oppression. In her drawings and prints, she combined the picturesque landscapes of her homeland with the techniques of contemporary art. For her last work, When I Count, There Are Only You ... But When I Look, There Is Only a Shadow (2011-2013), Lashaiunited Goya’s Desastres with her own video projections. In her subtle but subversive video installations, she takes a critical look at the political situation and difficult living conditions in Iran. For this reason, her oeuvre remains of great contemporary relevance.

In Eyewitnesses, the MSK demonstrates how the past and present are intimately intertwined. Born almost exactly 200 years apart, Goya and Lashai were chroniclers of the conflicts in their respective countries.

Both experienced radical social upheavals and were forced to work in periods of repression and censorship. They both used art, and even humour, to take their own unique stands against the injustices that they witnessed.

To do this, they employed a variety of techniques and visual languages. By placing their work in dialogue, the MSK aims to encourage visitors to see the positive change in contemporary society through a better understanding of the past. Two centuries have elapsed since Los Desastres was created but the message remains internationally relevant, especially in the light of the numerous conflict situations that have arisen in recent years…