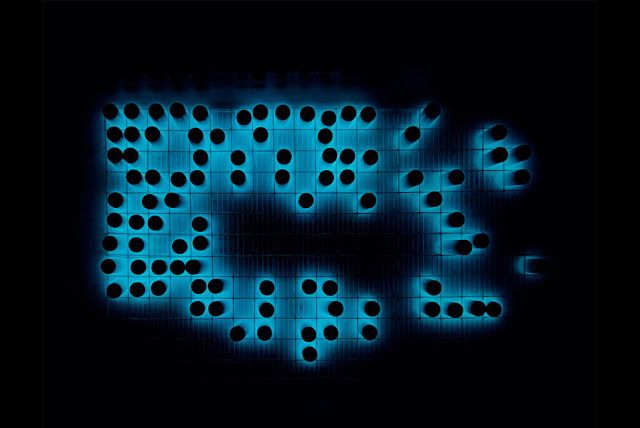 Taryn Simon, Nuclear Waste Encapsulation and Storage Facility, Chernekov Radiation, Hanford Site, U.S. Department of Energy, Southeastern Washington State, 2005/2007 © 2007 Taryn Simon. Courtesy Gagosian Gallery.
Taryn Simon’s encyclopedic typologies provide access to the peripheral or unfamiliar territories of our medialized world. They demonstrate the instability of fact, and how images are used to produce knowledge and authority. In her work, multi-facetted symbioses of image and text are exposed as the critical infrastructure and indicators of political, economic, social, religious and cultural systems.

The exhibition Taryn Simon. A Soldier is Taught to Bayonet the Enemy and not Some Undefined Abstraction was developed by the Galerie Rudolfinum (curator: Michal Nanoru). The concept and the selection of works were then modified and significantly expanded for the Albertinum. The works on view in Dresden date from 2007 to 2015 and include a preview from her most recent work Paperwork and the Will of Capital (2015), on show in Germany for the first time. This exhibition of Taryn Simon’s work turns away from the presentation of physical bodies at the center, and focuses on things – or rather on the moment when seemingly neutral objects enter into systems of control.

Simon’s artistic practice, which results from long-term research into systems of control and their rigorous maintenance on the one hand, and instances of disruption on the other, points us to the margins of our visual world. She often invokes the form of the archive to impose an illusion of structural order on the chaotic and indeterminate nature of her subjects. But in Simon’s work the image never stands alone and her extensive series and archives reveal the complexities of concrete, as well as invisible space between language and image. In An American Index of the Hidden and Unfamiliar (2007) she depicts objects, sites, and spaces that are integral to America's foundation, mythology, and daily functioning, but remain inaccessible or unknown highlighting psychological and bureaucratic control, access and authority; Contraband (2010) is an archive of global desires and perceived threats, encompassing 1,075 images of items that were detained or seized from airline passengers and postal mail entering the United States; Field Guide to Birds of the West Indies (2014) hones in on chance disruptions within the highly controlled environment of film; in Image Atlas (2012) and The Picture Collection (2013) Simon explores the human impulse to archive and organize visual information, pointing to the invisible hands behind seemingly neutral systems of image gathering; in Cutaways (2012) the artist uses a visual presentation of herself to subtly reveal the construction of news media; in Black Square (2006-ongoing) objects, documents and narratives are photographed within a black field with the precise measurements of Malevich’s suprematist masterpiece of the same name; and in Paperwork and the Will of Capital (2015) floral centerpieces at international signings underscore the stagecraft of political and economic power and how it is created, performed, marketed, and maintained.

Meticulously mining, questioning and upsetting the certainty that the photographic image and the archive assert, Taryn Simon turns our attention to the margins of systems of power, where control, its disruption, and the contours of their constructedness become visible. By a methodical visual and textual insistence and a highly careful mode of tracing, depicting and presenting, the artist not simply mirrors the systems she sets out to examine, but supersedes them in her rigorous application of their logic.

The exhibition was developed in cooperation with the Galerie Rudolfinum in Prague.

Taryn Simon (*1975) is a multidisciplinary artist who works in photography, text, sculpture and performance. Guided by an interest in systems of categorization and classification, her practice involves extensive research into the power and structure of secrecy and the precarious nature of survival. Simon’s works have been the subject of exhibitions at Galerie Rudolfinum, Prague (2016); Garage Museum of Contemporary Art, Moscow (2016); Jeu de Paume, Paris (2015); Ullens Center for Contemporary Art, Beijing (2013); Museum of Modern Art, New York (2012); Tate Modern, London (2011); Neue Nationalgalerie, Berlin (2011) and Whitney Museum of American Art, New York (2007). Current and upcoming exhibitions include Paperwork and the Will of Capital, Tel Aviv Museum of Contemporary Art (2016–17); and Taryn Simon: An American Index of the Hidden and Unfamiliar, Louisiana Museum, Copenhagen (2016–17). Among the permanent collections that include her work are the Metropolitan Museum of Art, Tate Modern, the Guggenheim Museum, Centre Georges Pompidou, and the Los Angeles County Museum of Art. Her work was also part of the 56th Venice Biennale (2015). She is a graduate of Brown University and a Guggenheim Fellow. Simon lives and works in New York.