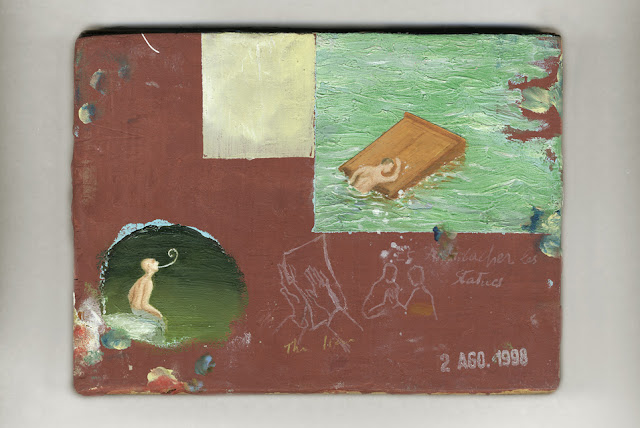 Francis Alÿs is known for his discreet performative solo actions as well as for coordinating large-scale collective allegorical events. Many of these performances—both ones in which the artist features as a protagonist and the mass actions in which Alÿs himself stays on the sidelines—are now revered as classics of the genre. In Re-enactments (Mexico City, 2000), Alÿs ambled through the city holding a loaded gun until a policeman stopped him; he then persuaded the officer to repeat the entire action and record it on video—hence the title Re-enactments. The process of negotiation and interaction (with the policeman) is characteristic of the artist’s approach, whose site-specific projects broach specific local and political situations through dialogue with people rather than by addressing them directly. When Faith Moves Mountains, implemented in Lima, Peru, in 2002, was a project of almost biblical proportions: five hundred volunteers moved a 550-yard-long sand dune by 4 inches. The piece reflected the mood of futility in a country ruled by a dictatorship and became a symbolic gesture of hope.

ADVERTENTIE
inRead invented by Teads
Le temps du sommeil (The Time of Sleep, 1996–), the centerpiece of the exhibition of the same title, exemplifies the subtlety and inscrutable quality of his oeuvre at large. The small pictures on wood panels measuring ca. 4.3 by 5.9 inches depict miniature scenes and often look like snapshots of simple gestures and activities that, upon closer inspection, appear to be fairly absurd.

Le temps du sommeil is a series of 111 such paintings the artist created over the past two decades but regards as incomplete. Rather than add new pictures to the ensemble, Alÿs reworks, alters, augments the existing panels, sometimes even overpainting them completely. Some have gone untouched for years, while others are subject to frequent revision. Around one quarter of the series has been repainted since it was last presented; no fewer than sixteen pictures were altered in 2016 alone, as date stamps indicate. The various stages in the work’s ongoing transformation—it may be said to evolve alongside the artist himself—survive only in photographic documentation, illustrating the constancy of Alÿs’s art and the foundation on which it rests, but also his changing interests and priorities.

The pictures are demanding in every respect: with their small formats, they disclose nothing to the fleeting glance—they demand sustained attention. Visitors who take the time to wander down the long array of pictures gradually become familiar with a singular pictorial universe: most of the compositions originated in the notebooks of the artists, whose painterly oeuvre has grown in parallel with his actions and major collaborative projects since the beginning of his career. Its defining feature are recurrent or similar figures that appear time and again, like the characters in a novel. Certain conspicuous protagonists clad in suits and known from other painting series as “the Liar,” “the Prophet,” “the Clown,” and the like were first sketched in Le temps du sommeil and then elaborated elsewhere, or conversely migrated from other creations into the series. Mirroring and inversion are frequent stylistic devices in Alÿs’s work, both in his writings and in his pictures. Le temps du sommeil thus blends the functions of an archive, a creative repertoire, and a medium for brainstorming.

Another salient aspect of his art is the interweaving of word and image, often through the titles of the works. The visitor should not be misled by the fact that the pictures in the series are presented alongside conceptual writings and ideas for interventions and works. The texts are not intended as annotations to the images; they enter into a dialogue with them, shining a light, always tinged with humor, on the complex interrelationship between visual and verbal communication.