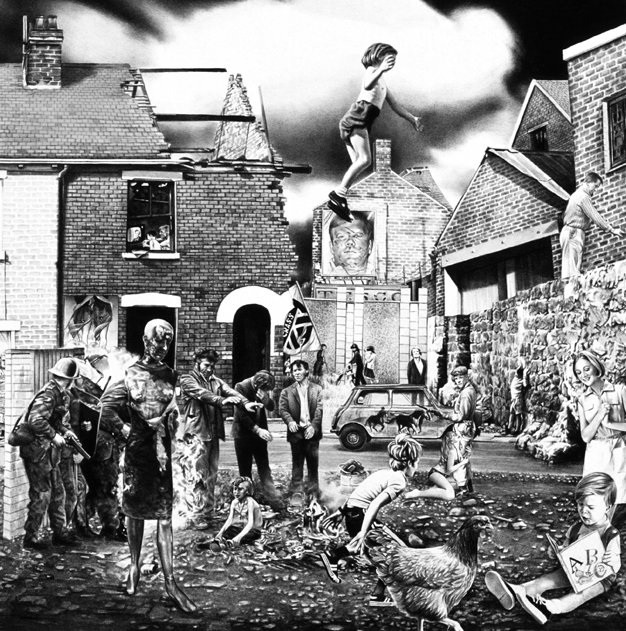 Front cover for Crass, The Feeding of the Five Thousand, 1978. Gouache 260 x 260 mm.
Firstsite presents Gee Vaucher: Introspective, the first ever survey of the renowned British artist’s work to be mounted in the UK.
ADVERTENTIE
inRead invented by Teads
The exhibition, which brings together more than 200 works, many of which have never been shown in public before, offers a complete overview of her fifty-year career, revealing the multifarious forces that have inspired and shaped her artistic practice.

Vaucher’s work is characterised by its political engagement. Her activism was forged in the 1960s and 1970s, but is rooted in an older tradition of dissent arguably dating to the 14th century, to John Ball and the Peasant’s Revolt. However, she abhors any form of classification, rejecting any ‘isms’ that seek to pigeonhole either her or her art. It is this ardent non-conformism that imbues her art with its power and originality.

The assembled works have been drawn from Vaucher’s archive, and include collages, paintings, videos, sculptures, prints, drawings and photography, each revealing the artist’s unique aesthetic; an amalgam of Surrealism, Pop Art and Dada, blended with the DIY immediacy of punk.

The show is divided chronologically into series. These are comprised of pieces from the 1960s up to her most recent paintings and drawings, as well as photographic and sound works that reflect on the changing cityscape of New York, where Vaucher worked in the late 1970s as a political illustrator for The New York Times and New York Magazine, amongst others.

The exhibition includes the iconic series of artworks Vaucher created for the anarcho-pacifist punk band Crass, of which she was a member from its inception in 1977 until its demise in 1984. The importance of this body of work is undeniable; indeed Jon Savage, the author of the seminal chronicle of punk rock, England’s Dreaming: the Sex Pistols and Punk Rock, has suggested that an entire book could be written about Vaucher’s contribution to the punk aesthetic and how she has inspired the street artists of today.

The works from this period include the cover of the first Crass album, The Feeding of the Five Thousand (1978). A complex painting, it contains a confusing and unsettling sequence of images of violence, poverty, torture, and family bliss, all set in a typical British street of the 1970s. The work could be seen as exaggeration, created to make a crude political point, however Vaucher’s explanation is telling, in that while it is shocking, it was only a reflection of reality: ‘There's nothing actually in the image that wasn’t around. The image of the scarred face for instance was on buses in London at the time. It was a big poster on the back of a bus, about drink driving. Everything in that image you’ve seen somewhere else before.’

The show also includes an installation, The Sound of Stones in the Glasshouse (2006), a walk-in greenhouse with embossed glass names of all the countries where the United States of America has instigated or taken part in war. Surrounding the walls are the names of former U.S. Presidents with quotations relating to conflict. This piece was created collaboratively with fellow artist and typographer Christian Brett.

Introspective also features rare footage of early 1970s performances of EXIT, the avant-garde group led by Penny Rimbaud, the co-founder of Crass and Vaucher’s longstanding creative partner. In two of these three films, members of EXIT can be seen recreating Anthony McCall’s ‘Fire’ series, one of which was performed in Colchester.

While Vaucher has claimed not to create feminist art, a good deal of her work engages with gender-related issues, especially within the family structure. The collage in the newspaper International Anthem No.2 (1979), which Gee created whilst living in New York City, tackles the subject of domestic violence. It shows a female figure in a bedroom gazing blankly either out of a window, at a mirror or at a wall, whilst to her right is a muscled man in a sports vest, a baby dangling precariously from his hands. Meanwhile, a toddler scrambles around an upturned and clearly dead chicken on the bed. It is a baffling and grotesque mise-en-scène, but one which makes no judgement, leaving the viewer to make of it what they will. The trenchant imagery of this work is offset by one of the most compelling series in the exhibition, the Portraits of Children Who Have Seen Too Much Too Soon (2006). The suite of paintings, which have previously been shown at Gavin Brown’s Enterprise in New York, are exquisite portraits of war-torn children, be that global war or the more personal nature of domestic abuse. While the subject matter is raw, the paintings could be sensational were it not for the evident tenderness of their composition.

Also included in the exhibition are collage works that take Max Ernst’s surrealist novel, Un Semaine de Bonte (1934) as their inspiration. To further contextualise Gee's reworking of the original Ernst collages, the exhibition’s co-curators, Marie-France Kittler and Stevphen Shukaitis, have arranged loans of books and prints by Ernst from the collections of the Victoria & Albert Museum and Southampton University.

Of the show, Firstsite director Sally Shaw says: ‘We are delighted and privileged to be holding the first major retrospective of Gee Vaucher’s work at Firstsite, not least because of her strong connections with Essex. A truly remarkable artist, she has created an astonishing body of work that is at once scabrous, heartfelt, wry and thought-provoking – a perfect match for Firstsite’s ambition to encourage new ways of looking and thinking.’†