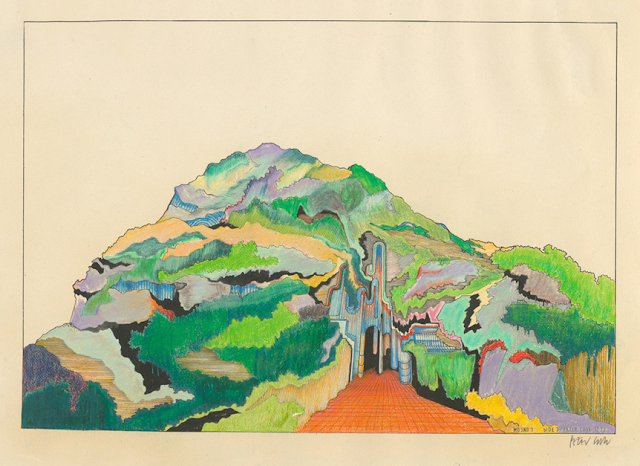 Vegetated Lump, 1972/1973. Colour pencils, watercolour, pastels on paper, 45,0 x 46,7 cm © Peter Cook.
The new temporary exhibition, Peter Cook. Retrospective is dedicated to the drawings of the famous British architect who is celebrating his 80th birthday this year. Back in 1982, the Aedes Architecture Forum, then located in the Savigny Platz arches, showed a fantastic exhibition of his work; now, almost 40 years on, Peter Cook returns to Berlin. Peter Cook. Retrospective enables a view into the artist’s work from Archigram to CRAB, from 1968 to today, from Plug-In City to Hidden City .

Peter Cook is regarded as one of the leading instigators of Archigram. This group whose name originated from the architectural pamphlet, Archigram - a wordplay on architecture and telegram - was founded in the 1960s by young British architecture graduates who strove to break away from traditional architectural office routine and continue the discourse stimulated during their studies. The given notions of form and space were to be overridden and burst apart, driven by the curiosity to explore what a future world may look like and question whether architectural language is at all set by boundaries.

Archigram searched for new solutions and concept models, focussing on the development of society. Underwater cities, living cells, plug-ins and hybrid villas were created: the ideas and experiments from this period, particularly the central motif of metamorphosis, recur throughout Peter Cook’s lifework.

In the series Way Out West: Berlin made in the 1980s, Peter Cook posed the question, “Why is the language of architecture so limited?”. A cactus is set with three symbols of Western architecture: the grid, a skyscraper and a square, where the spread of vegetation, again the process of metamorphosis, transforms the skyscraper to the point that it is no longer recognisable.

Some of his drawings are based on actual projects, such the urban planning development for Frankfurt-Oberrad in 1986, Real City: Frankfurt (which remained unrealised); many are rather experiments and utopias, such as Arcadia , Vegetated Lump and Hidden City , where the architecture was inspired by the surrounding vegetation, its beginning and end blurred, merging organically into nature.

Peter Cook was born in Southend-on-Sea, Great Britain in 1936 and studied architecture at the renowned AA - Architectural Association in London. He became internationally known through the architectural pamphlet Archigram, published for the first time by the group carrying the same name in the 1960s. Since the 1980s, Cook has taught at famous universities worldwide, including MIT, UCLA, Harvard, the Bartlett School and other well known faculties. He was knighted for his service to architecture in 2007. Peter Cook lives and works in London.