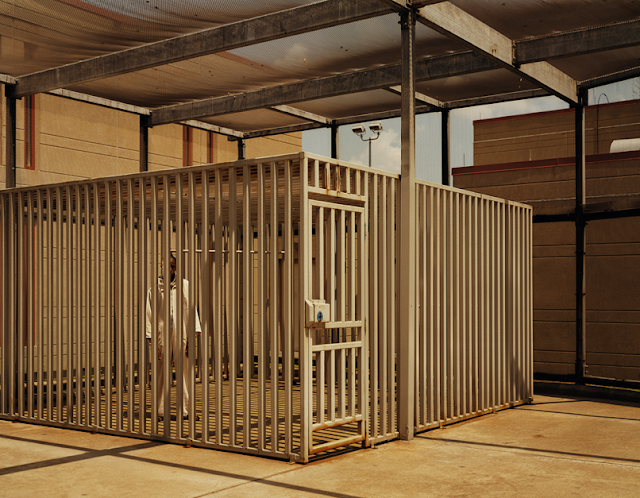 Taryn Simon, An American Index of the Hidden and Unfamiliar, 2007. Udendørs motions- og opholdsområde for dødsdømte fanger, “Buret” Mansfield Correctional Institution, Mansfield, Ohio. Archival inkjet, 94,6 x 113 cm.
With the photo series An American Index of the Hidden and Unfamiliar (2007) the American artist Taryn Simon (b. 1975) made her mark as one of her generation’s most important photographers. This autumn the photo series can be experienced at Louisiana, where it is being shown as part of the museum’s exhibition series Louisiana One Work.
ADVERTENTIE
inRead invented by Teads
About this very series the author Salman Rushdie writes: In a historical period in which many people are making such great efforts to conceal the truth from the mass of the people, an artist like Taryn Simon is an invaluable counter force. Democracy needs visibility, accountability, light ... Somehow, Simon has persuaded a good few denizens of hidden worlds not to scurry for shelter when the light is switched on, as cockroaches and vampires do, but to pose proudly for her invading lens...

An American Index of the Hidden and Unfamiliar portrays American society by uncovering a number of places whose only common feature is that they are normally inaccessible to the general public. The series spans subjects as different as radioactive waste immersed in water, an edition of Playboy magazine in Braille, the cage in which a death-row prisoner can move around outdoors, the living HIV virus, an inbred albino tiger and the storage site for newly-printed dollar bills.

Behind every single photograph lie years of research that has procured access for the artist to these rarely-visited places and culminates in a single photograph with related text. Taryn Simon reveals the USA’s hidden places like a spy, but her whole project is driven by the collector’s fascination with the rare or curious.

Together the photographs offer profoundly fascinating insights into the hidden structures and mechanisms that are concealed beneath the surface in the national culture of the USA and which make up the foundation, mythology and everyday functions of the country. Simon’s pictures paint a fragmented portrait of a nation where science, religion, medicine, entertainment, nature, security and politics link up in surprising ways.

The artist had the idea for the project in the period after the terrorist attacks of 11 September 2001, when the American authorities and media, in their hunt for weapons of mass destruction, were engaged in tracing and uncovering hidden information outside the borders of the USA. In the midst of this information crisis Taryn Simon chose to turn her gaze inward towards the USA itself and to investigate the country’s own inner boundaries and the contrast between the access to knowledge of the select few and the ordinary citizen.

With her portrait of the USA’s hidden infrastructures Taryn has created a work that investigates access to information and knowledge as a fundamentally asymmetrical relationship.

Taryn Simon herself says: “I wonder what the appearance of absolute transparency would be. I can’t imagine what form that woukd take. And if it is even possible. This was an attempt to see the centre with my own eyes. But what you come away with is just the confirmation that you cannot come to the centre and who knows if there is a centre. A photograph is always just another distance from which to see something, as one was far closer than most ...”