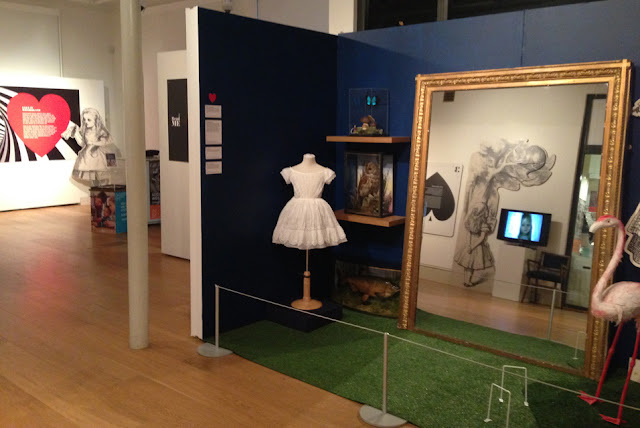 Installation view.
An acclaimed exhibition about Alice in Wonderland opens in Basingstoke this month, and uniquely features a very special object – her real life looking glass coming home to Hampshire.
ADVERTENTIE
inRead invented by Teads
From Salvador Dali and Tim Burton to Walt Disney, Lewis Carrol’s Adventures of Alice in Wonderland have appealed to successive generations and continue to do so, as this exciting new exhibition reveals.

Opening in the Sainsbury Gallery at Basingstoke’s Willis Museum, which is operated by Hampshire Cultural Trust, on 12 November (until 14 January 2017) Alice in Wonderland follows a chronological path from the first time that Carroll told his story to Alice Liddell and her sisters during a boat trip on the Thames in 1862, through to the different ways in which generations of illustrators, artists, musicians, filmmakers and designers have interpreted the story and its characters in the 150 years since it was first written.

This touring exhibition from the British Library opens with a spiralling Op Art vortex pulling visitors ‘down the rabbit hole’ of Carroll’s imagination and through the diverse visual marvels his stories stimulated. This is the only venue in the south to host the show. – which is appropriate as the ‘Alice’ of the stories was based on 10-year old Hampshire girl Alice Liddell.

Alice in Wonderland draws together an astonishing array of material, from copies of the original manuscript to computer games designed by undergraduates at De Montfort University, via toys, tea caddies, Edwardian films and psychedelic posters. However, uniquely to the Willis show, the undoubted star exhibit is THE Looking Glass itself.

Kindly loaned by the New Forest Centre in Lymington, Alice Liddell’s own mirror - or looking glass - was a cherished possession when she lived at Cuffnells House in Lyndhurst. Carroll, or Charles Ludwidge Dodgson as he was actually called, was a family friend of the Liddell family. A lecturer in mathematics at Oxford, he invented the story to entertain the daughters of his friend and colleague, Henry Liddell, the Dean of Christ Church Oxford. Some of Dodgson’s diaries will form part of the show.

Carroll’s own pen and ink illustrations for the original manuscript were influenced by the work of his friend, the Pre-Raphaelite artist, Dante Gabriel Rossetti and, in turn these clearly informed John Tenniel’s illustrations in the original edition. The Alice in Wonderland exhibition will display the original woodblocks and reveal the manner in which Tenniel’s charming engravings retain a certain froideur of expression, despite the surreal and absurd characters involved; Mad Hatters, Cheshire Cats, Mock Turtles and shisha-smoking Caterpillars.

In 1907, Carroll’s original copyright expired and this opened the creative floodgates for a whole host of new versions and depictions of Alice and the Wonderland characters. Arthur Rackham – famed for his Peter Pan illustrations, created exquisite art nouveau images, while Mabel Lucy Attwell created a softer, more saccharine world of Alice.

By the 1930s, turbulent British and European politics had brought a darker tone to Alice, with Stanley Baldwin and Adolf Hitler depicted as the Griffin and the Dodo. Indeed, Mervyn Peake’s experiences during the war shaped his illustrations of Alice in 1946 (and will be featured in the show), while Ralph Steadman’s Sixties version is a disturbing, somewhat dystopian allegory on consumerism, with the White Rabbit a frazzled commuter.

Other highlights of the exhibition include a high quality facsimile of the first edition of Alice’s Adventures in Wonderland illustrated by John Tenniel and early Alice memorabilia including wooden figurines, tea tins and a postage stamp case.

Janet Owen, Chief Executive of Hampshire Cultural Trust, says “The story of Alice has fascinated successive generations and we are delighted to host this touring British Library exhibition, which is part of national and international celebrations of the 150th anniversary of the publication of this iconic book. We are also delighted she is ‘coming home to Hampshire’ and that we are able to give visitors the unique chance to see the very looking glass that inspired a classic. We hope that visitors to Alice in Wonderland will find new enjoyment and inspiration from the collections on show.”