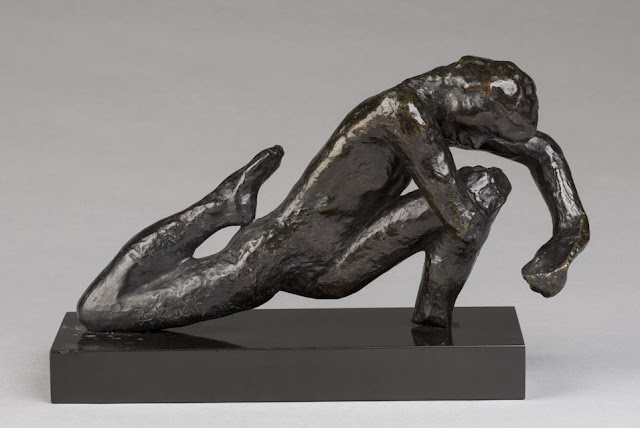 Auguste Rodin, Tanzstudie I um 1911, 1965. (Gussdatum). Bronze, Sandguss, 15,3 x 24 x 8,3 cm. Musée Rodin, Paris.
They knew and respected each other. They envied and admired each other. Their works embodied gracefulness and movement, body, space and time. They were fascinated by horses, women, and photography. They were outsiders and rebels – and they were geniuses. In a race to the Modern Edgar Degas and Auguste Rodin abandoned rules and norms and forged groundbreaking paths. At first they were mocked, but in the end they were venerated. They passed away in the same year (1917) within a couple of months of one another. The Modern would be unthinkable without them.

Never before have the works of Degas and Rodin been juxtaposed so comprehensively, in such confrontation with one another, and discussed so extensively as here. After Renoir, Monet, Sisley, and Pissarro the Von der Heydt-Museum Wuppertal now presents – for the first time – these two giants of Impressionism in a race towards a new art.

Edgar Degas and August Rodin came from different backgrounds: Degas (b. 1834) was from an aristocratic family; Rodin’s beginnings were more humble. At first glance there may not seem to be many commonalities between the two, other than the fact that they both died highly respected and esteemed in the same year. These giants seem to stand side by side, monolithic and unrelated to each other. Nonetheless, they encountered each other in the Parisian art scene of the late 19th century, engaged with each other, and each compared his works with those of the other. The exhibition at the Von der Heydt-Museum seeks out structural comparability, the congruities in the work of both greats, and what animated both of them and made them into the eminent protagonists of modernism.

Degas was primarily a painter and graphic artist and his sculptures were produced largely “on the side,” whereas Rodin worked first and foremost as a sculptor, and his experiments in painting, his drawings and wonderful watercolors are mostly perceived as peripheral to his rich artistic oeuvre. The inevitable result of this is a certain asymmetry in the exhibition – and yet one is struck by certain similarities and ideational continuity.

Both artists were afflicted with eye conditions, which led them both to similar ways of working. Both occupied themselves intensively with the theme of movement, and since it could not be permanently “suspended,” they drew on visual memory. Degas commented: “It is good to copy that which one has seen, but better still, to draw that which has been seen from memory.” And Rodin studied under Henri Lecoq de Boisbaudran according to the method “drawing from memory.” As a result, their models no longer needed to stand still and could move freely about the studio; what counted were their natural movements, which both artists attempted to capture. In this way they created impressionistic sculpture to complement the painting of light.