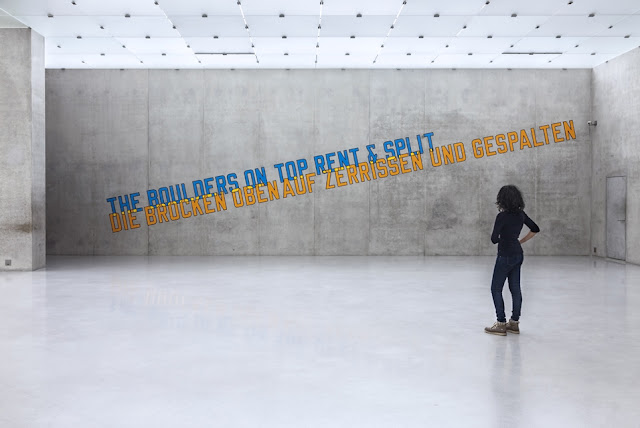 Lawrence Weiner, WHEREWITHAL | WAS ES BRAUCHT, 2016. Detail view third floor, Kunsthaus Bregenz. Photo: Markus Tretter. Courtesy of Lawrence Weiner © Lawrence Weiner | ARS, New York | Bildrecht, Wien, 2016 and Kunsthaus Bregenz.
The exhibition title WHEREWITHAL in white uppercase letters is outlined in black. It is a work about language and, according to Weiner, a mental image for the state of society, people, and the world today.
ADVERTENTIE
inRead invented by Teads
Art has to ask questions, stated Lawrence Weiner during his first visit to Kunsthaus Bregenz. If it contented itself with predetermined answers, it would fall into the traps of complacency and simple illustration. Born in 1942 in New York, Lawrence Weiner is one of the world’s most renowned artists and a cofounder of American conceptual art. In realizing art as an intellectual act, Weiner has from the very beginning worked with language. On the wall it attains a virtually tangible existence. »First there was the word, and with the word one realized that there was something before the word.« (Lawrence Weiner, 1996) Weiner always employs two languages, English and the respective native language, the objects acquiring both optical »dignity« and an interplay between understanding and space.

On the walls of Kunsthaus Bregenz Weiner’s texts become a commentary on the architecture, the space, and sensory experience. His works are only apparently site-specific. They relate to themselves, pursue elliptical odysseys through meaning and create deft plays on society, politics, and the place of art.

Lawrence Weiner is particularly important to Kunsthaus Bregenz because of his spatial thinking. The model for his text works across the building’s four floors is, according to Weiner, a kind of geyser. Geysers provide valves for excessive pressure, and art is a spontaneous escape from apparently hermetic tectonic crusts. He admits to that as being »idealistic«, but this nevertheless remains one of art’s tasks.

KUB Director Thomas D. Trummer on the Exhibition at Kunsthaus Bregenz: Texts have been applied to the polished concrete walls, some occupying the whole surface. They expand to become wall-filling messages that simultaneously convey poetic thoughts, for which the Kunsthaus could not be more appropriate. The interior’s concrete surfaces and skylighting create the impression of a deserted city, providing a worthy complement to the work of Lawrence Weiner, for whom text is a sculpture that merges with its support. The subject matter – what else could it be in Bregenz – is stone, but equally fragility, porosity, and the endangered. These are issues that condense in the title of the exhibition WHEREWITHAL | WAS ES BRAUCHT. Wherewithal here alludes both to what is absolutely necessary and to a world flirting dangerously with its own unraveling

He is the recipient of numerous awards, including a Guggenheim Fellowship (1994), the Wolfgang-Hahn-Preis from the Gesellschaft für Moderne Kunst at Museum Ludwig in Cologne (1995), the Roswitha Haftmann-Preis from the eponymous Zürich-based foundation (2015), and a honorary doctorate from the City University of New York (2013).

Weiner divides his time between his studio in New York City and his boat in Amsterdam.