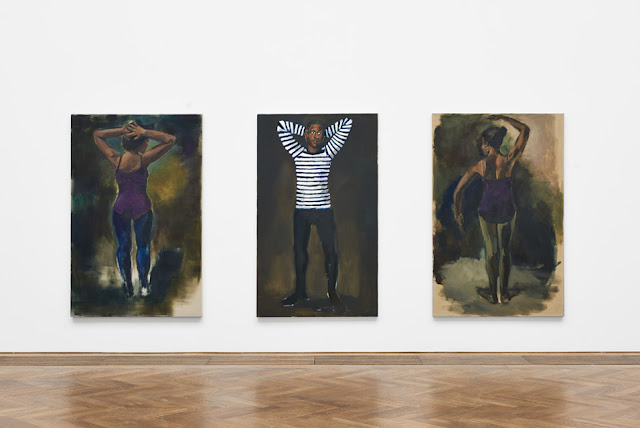 Lynette Yiadom-Boakye, Installationsansicht A Passion To A Principle, Kunsthalle Basel, 2016, Blick auf (v.l.n.r.) Pressure From A Didact, Witching Hour, Militant Pressures (alle 2016). Foto: Philipp Hänger / Lynette Yiadom-Boakye, Installation view A Passion To A Principle, Kunsthalle Basel, 2016, view on (f.l.t.r.) Pressure From A Didact, Witching Hour, Militant Pressures (all 2016). Photo: Philipp Hänger.
The exhibition is filled with figures that gaze directly, almost defiantly, at you. Others stand with arms akimbo, averting their eyes, or look pensive as they lounge in the soft embrace of a couch or hammock. Still others hold extravagant birds (an owl in one, a peacock in another) as if the acts were as usual as holding the daily news- paper, or they tense their arms and legs with the poise of a well-trained dancer. They are all beautiful without being model-like, serious without seeming stern, and well dressed without appearing to have tried too hard. There are rarely any identifiers of an exact time or place in which they stand or lie or lean or sit. There is no context for them, you could say, except their very selves. And in those selves there is nonchalance, refinement, calm intelligence. Also intensity, human depth, and a justness (someone wearing those threads would lie back and gaze at you just like that) that makes them seem familiar. And what you suspect you don’t already “know” about them, you try to conjure up. You almost cannot look at Lynette Yiadom-Boakye’s paintings and not wonder about the people pictured in them—what they do, whom they love, how they think, what they desire. And yet the show is not an exhibition of portraits per se.
ADVERTENTIE
inRead invented by Teads
A Passion To A Principle contains nothing but figurative images, yet none portray an actual person, either historical or contemporary. And this is important. In Yiadom-Boakye’s hands, color is structural and brushwork comes in vivid rushes—a reflection on painting as a medium drives her work, but fiction is its other propelling force. She builds her cast of figures from the haze of memory and a collage of sources, borrowing a sweater from a shop window and a pose from a nudist magazine. And through paint she writes her characters, as a novelist might. The quality of that “writing” keeps them from appearing as stereotypes or one-dimensional fantasies. Thus it is perhaps not surprising that in addition to being a painter, the artist—born in London and of Ghanaian descent—is also a poet and a writer, even if her favored mode for materializing her depictions is art history’s most traditional of mediums.

Yiadom-Boakye studied painting at that bastion of the medium, the Royal Academy of Arts in London. But her real education came in museums, where Edgar Degas, Édouard Manet, Walter Sickert, and others were her teachers. She learned any num- ber of techniques from them, she says, including lessons about the layering of color and economy of means (why use four brushstrokes when one will do?). It was with them, too, that she learned to find her own style, indebted to the past but operating wholly on her own.

Her paintings are in equal measures dark and luminous, painted with palpable brushstrokes that give her figures vivid presence, even when they stand in inky darkness, and even when the painter has left areas deliberately unresolved. There is something unabashedly classical about them, borrowing from traditional portrait compositions (the three-quarter bust, the head shot, the grouping of figures), but she also deliberately deploys modernist cropping (the tips of a dancer’s fingers in Tell The Air, the edge of a foot in A Focus For The Cavalry).

Here and there patches of bare canvas show through, and Yiadom-Boakye’s mark- making is sometimes so loose, so will- fully imperfect, that her paintings act as an apt pendant to the utter humanity of her (nevertheless unreal) figures—for what is human if not the fact of being flawed? Her titles, full of casual but enigmatic poetry (Daydreaming Of Devils, Sermons For Heathens, To Hell For Leather On A Hound) suggest as much: they allude to temptation, damnation, defiance. Even when they point in another direction, as in A Culmination or Militant Pressures, they still act as a layer, like an underpainting of deep vermillion that seeps through everything on top of it and subtly but inevitably imbues the whole with a mood or tone.

Yiadom-Boakye originally considered becoming an optician. But science was a problem, she admits, so she became instead another kind of observer of visual perception. And although her figures sit in a no-man’s-land of place and time, few figurative painters diagnose their present as percussively as she does. A Passion To A Principle, Yiadom-Boakye’s first institutional solo exhibition in Switzerland, comprised of all newly painted works, uses one of art history’s oldest and most venerated genres to make portraits in another sense, ones in which the true subject is both the medium of painting as such, and our own selves—right here and right now—as beings in the world.

This happens—paradoxically, powerfully— through her particular deployment of fiction. Speaking about the writing of James Baldwin, a critic once asked, “How do people come to know themselves? One way is by reading fiction. The profound act of empathy de- manded by a novel, forcing the reader to suspend disbelief and embody a stranger’s skin, prompts reflection and self-questioning.” This is what Yiadom-Boakye asks of us.

And what better moment to be so prompted? Her paintings make clear: our museums and our histories of art, like power structures of all sorts, are full of representations of and by white people. Depictions of black people by black artists are astoundingly few. Hers, then, is a social portraiture, picturing a whole segment of the population—a reality— that remains still so little accounted for in either art history or politics. Yiadom-Boakye’s insertions of (fictive) black figures into the canon, into discourse, into our exhibition spaces, are quietly subversive, not combatively arguing for anything, but simply rendering black lives visible—literally giving them matter and thus showing that they matter— always with quiet grace. She could have presented them otherwise, the burden of their history weighing on their shoulders. But, as she has explained, “They are recognizably human, but they are not real. They do not share our anxieties or woes. Nor do they need to be celebratory. In the painting is where they exist, and that makes them omnipotent. Painting gives them power.”

Lynette Yiadom-Boakye was born 1977 in London; she lives and works in London.