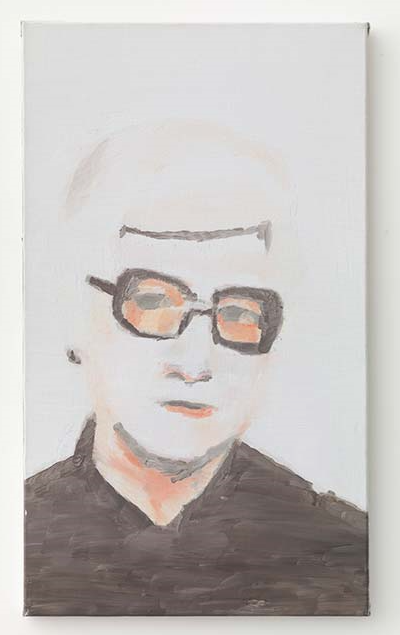 Portrait by Luc Tuymans, 2000; Private Collection. © Courtesy David Zwirner, New York/London.
A selection of paintings made and chosen by the Belgian artist Luc Tuymans will go on display at the National Portrait Gallery this autumn, it was announced today, Wednesday 3 August. This is the first time that the artist has made a thematic selection from his body of work and all are portraits of people wearing glasses.

The portraits have been selected for the National Portrait Gallery from a larger exhibition of his works currently on view at the Museum aan de Stroom in Antwerp. Luc Tuymans: Glasses (4 October 2016- 2 April 2017) is a result of a collaboration between the two institutions and Luc Tuymans’s studio. The display opens ahead of Intrigue: James Ensor by Luc Tuymans at the Royal Academy of Arts (29 October 2016 - 29 January 2017) in which the artist curates an exhibition of the work of the great Belgian expressionist painter.

Tuymans paints a range of subject matter from major historical events to the everyday, in this case the quite ordinary phenomenon of spectacles. As he says: ‘I have always enjoyed painting glasses. Glasses bring a kind of distortion to the face... it is a strange instrument and practically a universal theme. The banality of glasses receives a different meaning when you paint them. When at a certain point I was looking through all the portraits I’ve painted up to now, I was amazed to discover that there were glasses in three quarters of them. This is certainly not a conscious choice… Glasses radically change the physiognomy of a face, but are not perceived as a radical change.’

Tuymans is widely regarded as one of the most significant and influential contemporary painters working today. Drawing on found images and photographs, his work deals with how history and memory is translated into paint and how we perceive people and things.

Dr Nicholas Cullinan, Director, National Portrait Gallery, London, says: ‘It has been a privilege to collaborate with Luc on this unique display of his work, which has a special resonance in a gallery devoted to portraits. Tuymans is, to my mind, one of the greatest painters working today, and also has a formidable curatorial eye - this witty project makes the most of both qualities, and reaffirms the National Portrait Gallery's commitment to showing the best contemporary forms of portraiture within a unique historical context.’