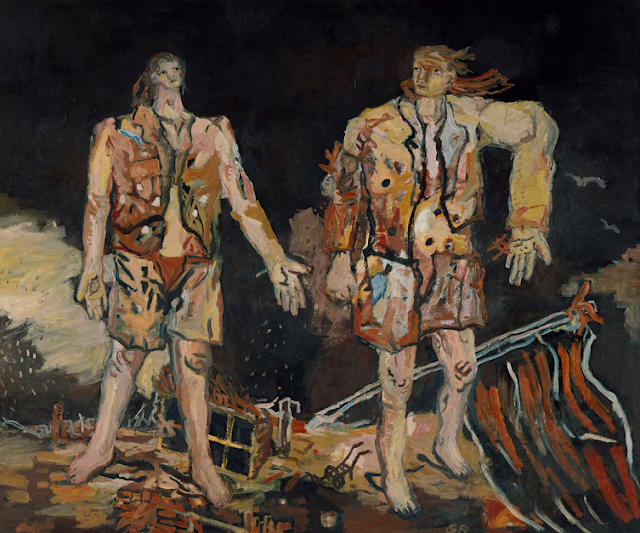 Georg Baselitz, The Great Friends, 1965 © Georg Baselitz 2016.
Georg Baselitz is regarded as one of the most important European artists of the post-war era. The exhibition Georg Baselitz: The Heroes focuses on the controversial suites Heroes and New Types, which Baselitz created in 1965-66, in a burst of creativity. They mark the breakthrough of the artist, who was 27 at the time. These monumental, figurative paintings and drawings show ragged and vulnerable soldiers who turn a sceptical eye on history and failure.
ADVERTENTIE
inRead invented by Teads
“It pleases me to see these works again. Most of them I haven’t seen for nearly 50 years. They're not bad, actually. But it pains me that we are living in a time when they again feel relevant.” Georg Baselitz

When Georg Baselitz (b. 1938) was branded as being “sociopolitically immature”, expelled from art college in East Berlin, and the police confiscated the works from his first exhibition in the West, he soon won the reputation of being a romantic outsider on the art scene. Neither East German social realism, 1960s slick pop art, nor cold minimalism interested Baselitz. He describes how he grew up in a period where all order had been demolished, and he did not want to create a new one. Baselitz has remained sceptical of all ideologies throughout his life. It is hard to overestimate his impact on the postmodern and neoexpressionist “wild” painting of later generations.

“These works are ambiguous and contradictory. To portray ‘heroes’ and ‘new types’ after the war was a provocation to those who wanted to forget the war and celebrate individualism. But Baselitz’s paintings are also about vulnerability and failure,” says Magnus af Petersens, curator.

The exhibition Georg Baselitz: The Heroes is the first major presentation of Baselitz’s early oeuvre and his controversial breakthrough, featuring some 30 paintings and 20 drawings, most of which have never before been shown in Sweden. Aged 27, Baselitz created the paintings that later became known as Heroes and New Types. These raw and expressive paintings portray broken, vulnerable men in apocalyptic, ravished landscapes. Certain figures recur in Baselitz’s art, like social rejects; in his world, the heroes are tragic failures. The exhibition also features a few of his so-called Fracture Paintings. Here, the motif looks from a distance as though cut up and sewn together, but the fractures are, in fact, painted.

“A fracture is an injury, like a broken bone, it is easy to see these paintings as an expression of how Baselitz saw Europe, and especially the divided Germany, after the war. The Fracture Paintings were followed by the famous paintings that Baselitz painted upside-down,” says Magnus af Petersens.