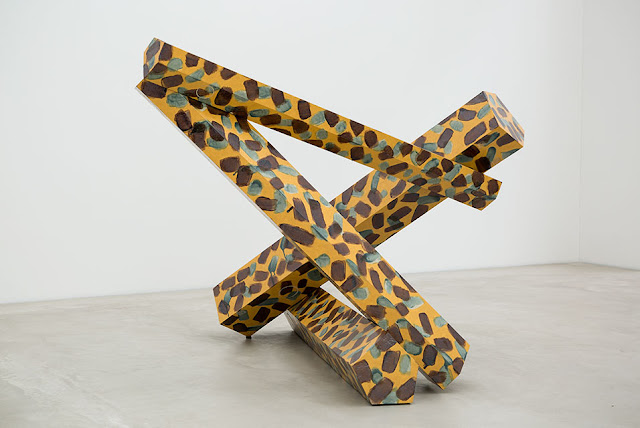 The Langen Foundation is presenting the work of British sculptor Richard Deacon, one of the leading representatives of contemporary sculpture. The oeuvre of this Turner Prize recipient (1987), which spans more than four decades, is distinguished by dynamic abstract forms and an astounding variety of materials. The exhibition On The Other Side, developed in cooperation with the Kunstmuseum Winterthur, offers a comprehensive overview of Deacon’s artwork from the last decade. With around 45 sculptures made of wood, metal, and ceramics, the exhibition highlights Deacon’s multifaceted language of form and the experimental treatment of materials so characteristic of the artist’s work.

Since the 1980s, Richard Deacon has been utilising a wide variety of materials in making his sculptures, such as wood, stainless steel, clay, paper, and diverse kinds of plastic. Still today he always takes the respective qualities of a given material into account when arriving at his forms by exploring the possibilities – and limitations – presented by the material. For example, in the sculpture Orinoco (2007) he used steam to help bend wood in such a way that the rigid material appears flexible and flowing, or in his series of works called Assemblies (2008) he has built complex constructions out of ceramics. Deacon’s Infinities (2008) – reliefs of polished stainless steel – are composed of organically shaped elements, while his most recent ceramic sculptures, the Flats (2014), place emphasis on painterly glazing.

Deacon’s sculptures arise through the work process itself, leading to results that correlate with his exhibition title On The Other Side, thus eluding the predictable and the conventional. As such, the artist – who likes to call himself the “fabricator” – employs both artisan and industrial techniques, while also consulting with specialists for wood, metal, and ceramics. “I like working with other people,” says Deacon about his working method, which is distinguished by close, long-term cooperative relationships and an interest in dialogue and collaborative work. Considering the strong meaning that questions of collaboration currently hold in art discourse, Richards Deacon’s work makes a significant contribution in this respect as well.

A German/English catalogue published by Richter Verlag will accompany the exhibition, featuring texts by Dieter Schwarz and Jon Wood and an interview with Richard Deacon by Christiane Maria Schneider