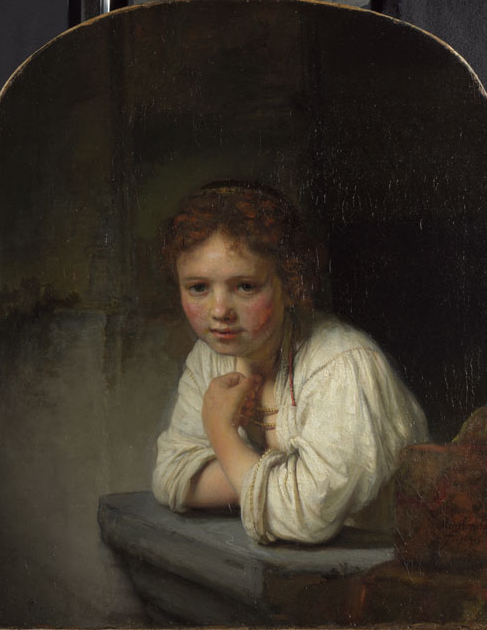 Rembrandt Harmensz van Rijn, Girl at a Window, 1645, oil on canvas, DPG163. By Permission of the Trustees of Dulwich Picture Gallery, London.
Am I Rembrandt? (8 Nov – 5 March 2017), the final display in Dulwich Picture Gallery’s Making Discoveries series brings the Dutch Master’s flamboyant Self-Portrait, Wearing a Feathered Bonnet, 1635, (on loan from Buckland Abbey, National Trust) to London for the first time. The display also delves deeper into the Gallery's own works by the painter with Girl at a Window, 1645, shown for the first time with its surviving preparatory study.
ADVERTENTIE
inRead invented by Teads
The status of the self-portrait as an authentic work by Rembrandt has been questioned in the past, but following extensive technical analysis and investigative work by the National Trust and leading Rembrandt specialists, it was firmly attributed to the Master in 2014. The self-portrait inspires a wider display, exploring how curators and conservators worked together to authenticate the painting. It also examines the authorship of other works by Rembrandt, acquired by the Gallery's founders in the late 18th century.

Dulwich’s paintings Jacob de Gheyn III, 1632, and Girl at a Window are undisputed works by Rembrandt that are often used as a standard by which to judge unsigned paintings from the same periods. Conversely, A Young Man, perhaps the Artist’s Son Titus, 1663, was previously doubted as a genuine Rembrandt due to its degraded condition, whilst Jacob’s Dream, 1710-15, was once a much admired Rembrandt until the restoration process revealed the signature of Rembrandt’s last pupil, Aert de Gelder. Seen together these works and accompanying analysis offer a special insight into the often challenging practise of attributing Old Master works, drawing upon a curator’s knowledge of the artist’s style; surviving documentation relating to the work’s history; and analytical investigations that reveal the artist’s materials and techniques.

Girl at a Window, one of the Gallery’s most celebrated works by Rembrandt, is being displayed next to the only known preparatory study for the work, on loan from The Courtauld Institute of Art (Count Antoine Seilern Bequest). This is the first time both painting and study have been displayed together, revealing how Rembrandt transformed a quick graphite sketch, made from life, into the finished painting. Seen together, the works offer a unique insight into the artist's creative process.

Am I Rembrandt? is the final of four displays in the Making Discoveries: Dutch and Flemish Masterpieces series, which has thus far explored works by Van Dyck, Rubens and Dou in Dulwich’s collection. Bringing together recent historical and scientific research, the series has revealed intriguing discoveries, shedding new light on these familiar works. This research has been achieved through the recently published catalogue of the Dutch and Flemish paintings collection at Dulwich Picture Gallery, which was launched on 10 October 2016. It is the first comprehensive catalogue covering this part of the collection and includes over 220 paintings, detailing their provenance and historical significance. It is available to buy online and from the Gallery shop.