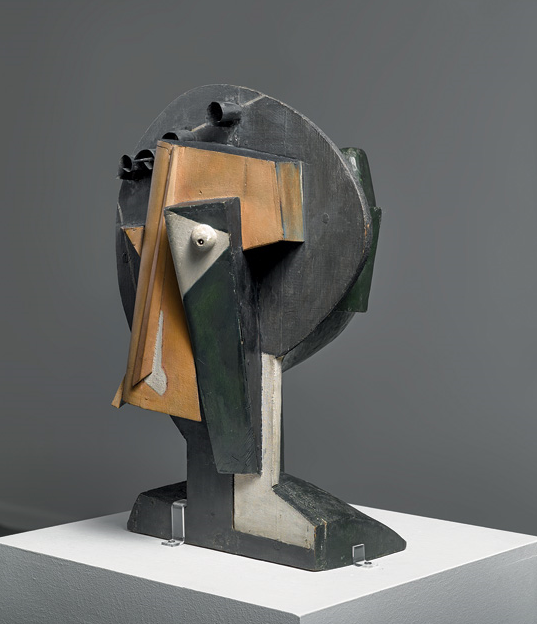 Henri Laurens, Head of a Woman, 1916-1917. Painted wood and sheet metal; 45 x 33 x 37 cm. Collection of the Tel Aviv Museum of Art. Gift of the Goeritz Family, London, 1956, in memory of Erich Goeritz TAMA 1698 © Tel Aviv Museum of Art/ Dima Valershtein © Henri Laurens, VEGAP, Barcelona, 2016.
Barcelona's Picasso Museum unveiled an exhibition on "Cubism and War" on depicting how one of the most influential artistic styles of the 20th century survived World War I.
Born around 1907 with Picasso's ground-breaking painting "Les Demoiselles d'Avignon", Cubism could have run out of steam during the conflict as the Spanish artist and others who had settled in Paris suffered shortages and destruction.
"The movement had hardly begun and it could have been cut off by the war but they kept it alive, they didn't let it get frozen and die," curator Christopher Green told AFP.
"And it's rather extraordinary with this catastrophe, this massacre happening so close."
With around 80 works from museums such as New York's MoMA, Paris's Georges Pompidou Centre or London's Tate Modern, the exhibition gives an overview of Cubist production between 1913 and 1919.
On show are artists such as Spain's Picasso and Juan Gris, Mexico's Diego Rivera or the French Henri Matisse, Georges Braque and Fernand Leger.
Braque and Leger were called up and experienced the war first hand, but the others also suffered the effects in Paris, not far from the frontline, with food and heating shortages.
But despite this, the exhibition radiates optimism with colourful and dynamic paintings -- the 1914-1918 war barely present.
"For them, making art was about construction, about building and the war was about destruction and about death," said Green.
"They realised that photography and film were actually depicting the war better than any painter could."
As such, the exhibition starts with photos of the war in a dimly-lit room.
But this soon gives way to works of art that centre on experimenting with space, textures and breaking objects and figures down in portraits and still lifes.
World War I, which killed more than 16 million people, reappears at the end with Gris's "Still Life on Plaque" which resembles a memorial to the victims, and three works by Braque, who was seriously wounded in combat.
"He never painted the war, he never touched it in his artwork, but somehow the war remained inside him," said Green.
© 1994-2016 Agence France-Presse