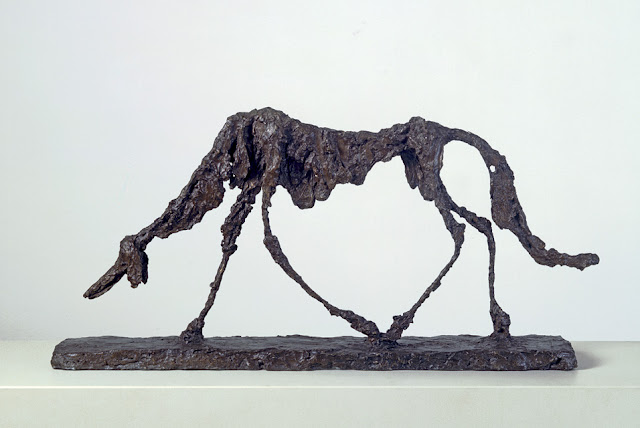 An important work of research, brought together from the collection of archives at the Musée Picasso and the Fondation Giacometti, has revealed new, significant documents, sketches, notebooks, and annotations. These documents clarify the unknown relationship between these two artists  a relationship both friendly and formal , and the mutual interest that they shared during key moments of their careers, despite their twenty-year age difference.

Although each artist exhibits different personality traits, they are each characterized by a spirit of liberty and invention. Picasso and Giacometti share a fascination for the link between Eros and Thanatos, like the displacement of limits of representation. From their first encounter at the beginning of the 1930s to their intense dialogues after World War II, the two artists never ceased to exchange on their creations and their arguments over realism's return. Like the exhibition reveals, the number of formal and thematic similarities draws their works closer to the surrealist period. From the end of the 1930s, the two transformed their practice and shared questions and theories of art and its relation to reality, which the painter-sculptor and the sculptor-painter responded to in different formal solutions.

Organized in eight sections, the exhibition proposes a chronological and thematic programme which presents the different aspects of their artistic production of the following mediums: painting, sculpture, and drawing. After having evoked the development of the two artists and the artworks from their youth to their modernist creations, the exhibition shows the correspondences between their artworks, like the influence from non-Western art or the surrealist movement to the return of realism during the period after the war.

Next to the emblematic works of each artist like Paul en Arlequin (1924), Femme assise au fauteuil rouge (1932) and La Chèvre (1950) by Picasso or Femme qui marche (1932), Cube (1933-1934) and Homme qui marche (1960) by Giacometti, are presented the rare and fragile casts, certain newly discovered drawings, and a number of archives unveiled for the first time. A catalogue richly illustrated published in co-edition with Flammarion will accompany the exhibition. It brings together new essays by art historians  the curators of the exhibition  as well as an anthology of historic texts dedicated to these two artists.

Room 1
The National Picasso-Paris Museum and the Fondation Alberto et Annette Giacometti present the first exhibition dedicated to the work of two of the greatest artists of the 20th century: Pablo Picasso and Alberto Giacometti. Research carried out specially for this exhibition has revealed the little-known relationship between the two artists and the interest they took in one another at key moments of their careers, despite their twenty-year age difference.

From their initial meeting in the early 1930s, through their formal and theoretical explorations of the surrealist period, to their extensive postwar dialogue on the struggles of returning to realism, the two artists never ceased to exchange views on their craft. The exhibition offers an overview of the different aspects of their artistic production and the different formal solutions adopted by the two artists.

Room 2. Modern sculpture
Early sculptures by both Picasso and Giacometti are modelled on the art of Auguste Rodin. Whereas Giacometti was one of the disciples of Antoine Bourdelle at the Grande Chaumière in Paris, Picasso never trained as a sculptor. When the two realised the impossibility of "truthfully" creating a portrait sculpture through the naturalist method, the solutions they invented took parallel trajectories. Giacometti followed in the footsteps of the elder artist, whose work he discovered upon arriving in Paris. He abandoned the classic portrait style of his sister Ottilia for the stylised lines and multifaceted cubist decoupage practised by Picasso in the portrait sculpture of his mistress, Fernande Olivier.

Room 3. Signs of genius
Pablo Picasso and Alberto Giacometti began to paint and sculpt very early on. The sons of artists, they each grew up in the paternal studio, where they worked on their first pieces under the watchful eye of their fathers. They trained by creating portraits of family members, in which they strived for a faithful representation of the model. They were each 14 years old when Picasso created The Barefoot Girl (early 1895) and Giacometti Still Life with Apples (circa 1915), both of which attest to a paternal influence through the attention paid to rendering reality. After a short spell training at the École des Beaux-Arts, the two young artists decided to leave their countries of origin (Spain for the former, Switzerland for the latter) and settle in Paris, then the capital of the Arts.

Room 4. Distant influences
Picasso and Giacometti were close observers of non-Western art and archaeological objects. They drew inspiration from art reviews and the collections of the Trocadéro Museum of Ethnography and the Louvre, picking up on details of masks, shields and statuettes and re-imagining them in their own way. Picasso's totems and Giacometti's steles display the same stylised forms and evoke the same magical quality as works from the Cyclades, Oriental antiquities and sculptures from Africa and Oceania.

Room 5. A shift to the flat
While Picasso's paintings from the neocubist period (Figures, 1927) were characterised by a "shift to the flat", Giacometti transferred this structural model through sculpture with the "flat figures" that teeter on the brink of abstraction while remaining anchored in representation. Similarly, Giacometti's compositions in grids and cages, such as Man (Apollo) (1929), echo Picasso's 1928 Figure, created in homage to Guillaume Apollinaire.

Room 6. The living and the dead
The banalisation of the body after death and its materialisation into an object were two subjects explored by Picasso and Giacometti. Both of their bodies of work feature lifeless figures  often someone dear to them , skulls or heads. In The Death of Casagemas (1901) the thrown-back head of the poet and friend of Picasso, who committed suicide in lovestruck despair, echoes Head of a Man on a Rod (1947) by Giacometti, where the open mouth appears to signify a scream from the void. The objectification of death is reflected in the figures of skulls, some of the most startling sculptures, at once vanitas and memento mori.

Rooms 7, 8 and 9. Eros et Thanatos
In representations of love, where all forms of shapelessness are explored, images of Eros (Love) are subjected to just as much dismemberment of the human body as those of Thanatos (Death). The living urges of sexual desire rub shoulders with the instincts of death. In Picasso's great 1931 painting Figures By The Sea, monstrous bodies devour one another in a kind of romp that evokes the violence of Giacometti's surrealist 1933 sculpture Woman with her Throat Cut (both displayed in room 9), lying on the ground. The distortions of the human body culminate in organic metaphors whose strength of synthesis expresses, in the words of Carl Einstein, a "concentration of dreams".

Room 10. Evidence of a friendship
The sketches and annotations found in the archives attest to numerous exchanges between Picasso and Giacometti. The two artists met for the first time in 1931 and their friendship was to last until the early 1950s. They quite quickly became very close, often visiting one another in their studios. Giacometti openly studied the works of his older friend, copying them down in his sketch books. Picasso was not indifferent to the surrealist compositions of the young Swiss man either, especially his Suspended Ball of 1931 (displayed in room 9). Returning to Paris after the war, Giacometti began a portrait sculpture of Picasso, which he sadly never finished.

Room 11. The lover and the model
A series of painted and sculpted portraits of the loved women develop the inexhaustible dialectic of the lover and his model. Though Picasso and Giacometti sought to capture the truth and reality of a muse, their works also convey the psychological intensity of their relationship with the model. Thus, the face of Dora Maar, Picasso's lover and principal model from 1935 to 1943, saturates the canvas with her tortured presence. Annette, Giacometti's future wife whom he met in 1943, offered to sit for him for long periods at a time. Her face is subjected to the scrutiny of an artist struggling with the impossible "search for the absolute" (Sartre) in order to recreate the aura of a being.

Rooms 12 & 13. A return to realism
After the Second World War, the two artists returned to Paris, where they visited each other regularly. Their works from this time revisit the realism of daily life. For Picasso, both spaces and characters became oppressive and sombre, while Giacometti erected frozen, motionless figures from rough, stone-like bronze. The renewed link with the real is also conveyed through creations with a wildlife theme, such as landscapes and still lifes. To create his famous Dog (1957), Giacometti chose the slender silhouette of the Afghan Hound that belonged to his friend Picasso.