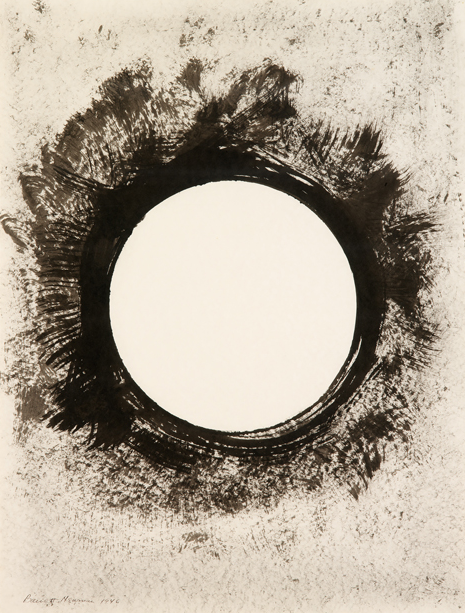 Barnett Newman, Uden titel, 1946. Blæk på papir, 61 x 46 cm. Louisiana Museum of Modern Art. Donation: Annalee Newman.
Louisiana Museum of Modern Art opened the exhibition programme on 6 January 2017 with a new exhibition in the series Louisiana on Paper, showing the American artist Barnett Newman (1905-1970).
ADVERTENTIE
inRead invented by Teads
Barnett Newman was a leading figure on the art scene of the 1950s in New York. Like other artists including Willem de Kooning, Jackson Pollock and Mark Rothko, he worked in radical and revolutionary ways with painting. They broke with the dominant European tradition, and with their so-called ‘Abstract Expressionism’ and ‘Color Field’ painting they opened up brand new directions in art. In his TV series for the BBC on the art of the 20th century the Australian critic and author Robert Hughes called the effect of Abstract Expressionisn and other such phenomena The Shock of the New.

When it comes to other media than painting, too, Barnett Newman broke down boundaries and sought new ways of expressing basic mental and existential conditions. Louisiana on Paper is showing a selection of 12 drawings and 26 prints. The Louisiana collection has two very famous Newman drawings – Untitled (1946) and Untitled (1960) – both gifts from his wife of 34 years, Annalee Newman, who established The Barnett Newman Foundation nine years after the artist’s death. Besides being the official artistic estate of Newman, the Foundation also works to promote knowledge and understanding of his life and work. Barnett Newman had a strong influence on among others Donald Judd and Frank Stella, whose work can also be found in the museum’s collection.

The exhibition has been organized by Kunstmuseum Basel, where it was shown through the summer of 2016. Louisiana’s two drawings were lent to that exhibition.

In connection with the exhibition the film ”American Artists: Barnett Newman”, directed and produced by Lane Slate, 1966, will be shown in the exhibition.