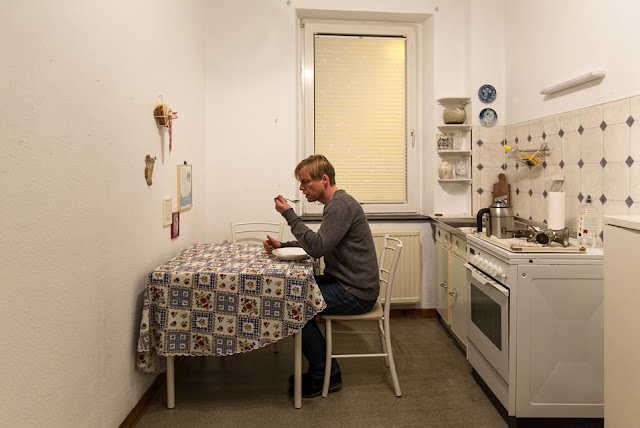 Gregor Schneider, Essen Life action, Odenkirchener Str. 202, Rheydt 2014 © Gregor Schneider / VG Bild-Kunst, Bonn 2016.
Gregor Schneider was born in Rheydt in 1969. At the age of thirteen he already painted pictures that he continues to include in his exhibitions and publications. In 1985, he had his first solo exhibition at Galerie Kontrast in Mönchengladbach, and the same year, he began work on his house on Unterheydener Strasse 12 in Rheydt, which was to become Haus u r. In 2001, he won the Golden Lion for the German contribution to the Venice Biennale. The inner logic of his work led him to embark on a number of highly controversial projects. Misunderstood as provocations, some ran afoul of censorship. The rejection of his plan to erect a black cubic sculpture with the dimensions of Mecca’s Kaaba on Saint Mark’s Square in Venice in 2005 spurred him to engage more deeply with the public and political dimension of his work.
ADVERTENTIE
inRead invented by Teads
«Experiences affect all the senses and are based on an unfathomable world.» Gregor Schneider

Over the course of thirty years, Gregor Schneider has created a body of work that touches upon some of society’s most sensitive sore spots. In the beginning of his career, he developed the concept of an artistic practice that devours its own products, thereby questioning the subjection of art to economic necessity.

Later, he saw parallels between the secret, antiseptic high-security detainee cells of the Guantánamo Bay detention camp with the ‘white cube’ of museums and galleries. In 2008, he spoke about creating a room to die in and his desire to show a dying person in a museum. He received death threats as a result. His own personal Dying Room is now constructed for the first time in Germany. Schneider’s thoughts on the subject of death and dying are based on the question whether death is an absolute end or a transition to something else that needs remain unknowable. Schneider has staged cultural crossovers, tried to link an Islamic and a Catholic sacred site and has responded to the return of the spirit of the Nazi era with the pulverisation of the house Goebbels had been born in. The medium of his creative practice is the installation of rooms inside similar preexisting rooms, the doubling of rooms, people and objects, the reconstruction of a building he cannot attain. His best-known work is the installation of twentyfour rooms of his Haus u r in the German Pavilion at the Venice Biennale of 2001.

«What I do is the thinking, three-dimensional and concrete. It thinks for itself, then extends into matter. Everything else is something totally different. I believe that thought is embedded in things, that they in turn speak and are my memory. That’s why I store those things and am now showing them together. The things will speak for themselves, perhaps different from before in yet another way. I fight against language as much as always, and against the detail. Usually I’m confronted with the power of knowledge and forced into the position of ignorance. My experiences of life are not images or texts. Experiences address all the senses and are based on an intangible world.» ---Gregor Schneider