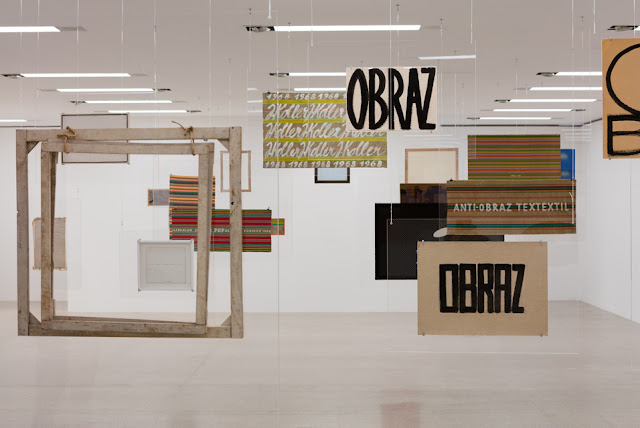 Exhibition view, Július Koller. One Man Anti Show, mumok Wien, 25.11.2016 –17.4.2017. Photo: mumok / Stephan Wyckoff.
mumok is presenting Július Koller. One Man Anti Show, a new approach to the work of Slovak artist Július Koller (1939–2007), an iconic figure in the history of the Neo-avant-garde and Post-avant-garde. His work has been a significant source of inspiration for artists and intellectuals worldwide since its rediscovery in the early 1990s and has become a key reference point for a young generation of artists and other protagonists in the world of culture. The full breadth and scale of Koller’s oeuvre is showcased for the first time in the exhibition at mumok, which highlights both his conceptual rigor and the broad spectrum of artistic methods he utilizes. Alongside internationally renowned pieces, the show presents many works, archival documents and ephemera that have never previously been exhibited. Extending across three floors, Július Koller. One Man Anti Show turns the spotlight on the topicality of this unique artistic practice through a new reading and presentation of Koller’s creative anti-universe, in which everything is called into question. The exhibition architecture, created by renowned Viennese architect Hermann Czech, is designed to define the show autonomously to the routine and the conventions of a museum.
ADVERTENTIE
inRead invented by Teads
For more than half of his life (1963–2007), Július Koller kept a “self-chronology” in which he recorded his constructive activities. Maintaining a critical distance to the art business and institutional art historiography, Koller sketched out the central motifs and formats of his counter-design in this chronology, set in opposition to the art world’s rules and values. This self-depiction of an artist’s life, which also encompassed the balcony of his flat as an exhibition venue without an audience, guides visitors through the show, whilst its title, One Man Anti Show, references the artist’s critical position vis-à-vis art and its institutions. The exhibition introduces the key themes, work-groups, motifs and methods that Koller deployed and perpetually transformed throughout his artistic development.

His strategy involved using run-of-the-mill quotidian life to undermine aesthetic ideals, aiming ultimately to create a “new cultural situation” intended to lead to a “new life, a new creativity, and a new Cosmohumanist Culture.” Koller saw himself as living in the midst of junk culture. The exhibition sheds light on the way in which he deployed everyday objects—ranging from newspaper cuttings or motifs borrowed from comics to packaging material—in precisely this spirit.

The mumok presentation opens with a restaging of one of Koller’s legendary action environments: the J.K. Ping-Pong Club (1970): both professionals and amateurs can play a round or two of ping-pong in the exhibition in Vienna, lobbing the balls, but also opinions and positions, back and forth in an ambience permeated by the notion of fair play. The J.K. Ping-Pong Club, at the time a statement directed against the oppressive political circumstances in the ČSSR after the Prague Spring, is more topical than ever today.

Július Koller engaged in his first cultural activities in 1963, while he was still studying art, inspired by hopes that artistic freedom could become a reality in Czechoslovakia during those years of political détente thanks to critique of the Stalinist personality cult and of Socialist Realism. In the mid-1960s, adopting a stance much closer to that of non-artists and amateurs than to the predominant academicism of professional modernist artists, Koller drew up his first manifesto: Antihappening (System of Subjective Objectivity). In this text, in a sense a counter-position to the Neo-avant-garde formalism of the day, he pronounced various realms of his private and public life to be art. Culture in the broad sense of the term thus became the field in which he operated, endeavoring to set it in relationship to art and to identify potential alternatives to existing artistic practice. Sport formed an important frame of reference for Koller in this undertaking.

Responding to empty exhibitionism in this period of political instability, Koller distributed telegrams in 1970, two years after the Prague Spring, proclaiming “UmeNie” [No Art]. His dialectic commentaries on art institutions later led to the establishment of the para-institution Galéria Ganku, named after a site popular with mountaineers and inaccessible to common mortals.

From 1970 on Koller increasingly shifted the focus of his interest from sport, engaging instead with language and denotations against a backdrop of utopian ideals. With their encoded “objects”, “orientations” and “organizations,” his performative “Universal-Cultural Futurological Operations (U.F.O.)” represent a system through which the artist creates his own communication medium, with every new contact becoming an impetus to archive the world. Over the next three decades, Koller created a major group of works and was also the subject of a series of annual portraits known as U.F.O.-naut J.K. (1970–2007). Recurring motifs of question marks, plus and minus signs, arrows pointing up or down, nets, sports fields or pitches, ping-pong and tennis balls create a field of simple, interconnected symbols. Through these ciphers, Koller encrypts yet simultaneously opens up a route into the meaning of the world around him.

Tennis and table tennis are not only recurring motifs in Koller’s work, but also constitute a political statement. He drew tennis courts on postcards, retraced their lines with chalk, and invited the public to table tennis tournaments rather than to exhibitions. In Koller’s eyes, the clear principles in such games, applied with the utmost clarity, point to a democratic scenario of fair play with precisely defined rules: a perfect expression of his utopias in a world otherwise shaped by arbitrarily determined and openly violated political rules.

The exhibition architecture, created by renowned Viennese architect Hermann Czech, references Koller’s hallmark artistic grammar and addresses its systemic approach. Czech’s architecture underscores the open and transformative aspect of objects and actions, a dimension that has always been crucial for Július Koller’s artistic practice. The presentation of various sections of Koller’s immense work archive was created in cooperation with Viennese artist Johannes Porsch.