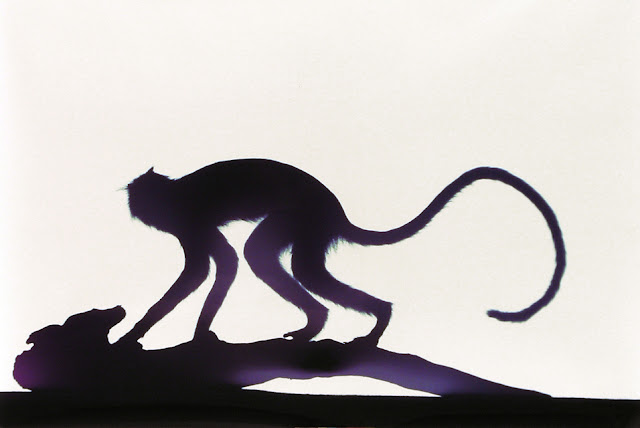 Ceropitherus mona denti. Dent-Meerkatz Musée d’histoire naturelle, Fribourg. Fotogramm, ca. 80 x 150 cm, 2003 © Floris Neusüss; Renate Heyne.
What if when Gottfried Wilhelm Leibniz (1646-1716), the bustling polymath of the Early Enlightenment, had set himself the goal of imparting his knowledge to the general public in the clearest and most practical way possible, using natural produce and artefacts? What would the storehouse, in which he stored such items for subsequent teaching, look like? Floris Neusüss and Renate Heyne answer these questions – in the Leibniz Year of 2016 – in their photogram exhibition which is designed as an intellectual game. Leibniz’ Storehouse is an imaginary walk through the fictitious warehouse of the scholar, where the items are not always carefully sorted, but often have been simply put down. However, the exhibits are not actually artefacts. Instead, they are photograms of the objects, produced by the two artists in various museums since 2000. As part of the Leibniz’ Stockroom exhibition, the extensive photogram archive of Floris Neusüss and Renate Heyne is being presented for the first time.
ADVERTENTIE
inRead invented by Teads
The Leibniz’ Storehouse exhibition resembles a walk through the fictitious short-staffed, short-on-space warehouse of the universal scholar Leibniz. The collection’s objects, which are stored here, are not always carefully sorted, but are often seemingly indiscriminately put down. Now and then, there are wonderful adjacencies: Next to the portrait of a pope, there is an African tribal figure, while the preparation of a sturgeon is found next to a crucifix. But there are also combinations in Leibniz’ Stockroom, which are clearly created deliberately rather than coincidentally: In one room, Leibniz collects steam engines, perfect order appears to reign here. However – and this is the special feature of the presentation at the ZKM – the exhibits are not actually artefacts. Instead, they are photograms of them, produced by the two artists in various museums since 2000.

As part of the Leibniz’ Storehouse exhibition, the extensive – and indeed unique – photogram archive of Floris Neusüss and Renate Heyne is being exhibited for the first time, which highlights the medial and historic dimension of the photogram.

Photograms – between display and concealment
The invention of photography in 1835 by Englishman William Henry Fox Talbot is to thank for the creation of photograms. In the 19th century, it was used as a procedure, with which the finest details could be shown – meaning it was initially superior to lens photography –, primarily in the natural sciences, for example in botany. X-ray images are ultimately nothing more than photograms either. Artists didn’t discover the photogram for their work until the 20th century: In the context of Dada by Christian Schad in 1919 in Geneva, in Paris by surrealist Man Ray in 1922 and in Berlin by constructivist László Moholy-Nagy, also in 1922. They felt that the photogram created an idealising abstraction of objects in comparison to photography, because it transcends their materiality to a certain extent by concealing the surfaces and because it does not follow the usual visual perspectives. The artists recognised that the photogram only creates a new pictorial reality through light, which is equivalent to the classic disciplines of sculpture, painting and drawing.

Despite the enormous appeal, which the photogram has and which found its most influential representatives in the form of protagonists such as Man Ray and Moholy-Nagy, the artistic following in this medium has remained negligible since that time. This is primarily because the photogram does not reproduce anything previously seen, and does not give the comfort of recognisability as is provided by photography. In a culture of the ever quickening glance, this skims over photogram images that have not sought to attract it through surface attraction. More than ever today, the pictorial reality of the photogram touches on highly topical cultural and social issues in the context of existence and appearance as well as philosophical discourses of Plato by Friedrich Nietzsche, Theodor W. Adorno, Vilém Flusser and Jean Baudrillard.