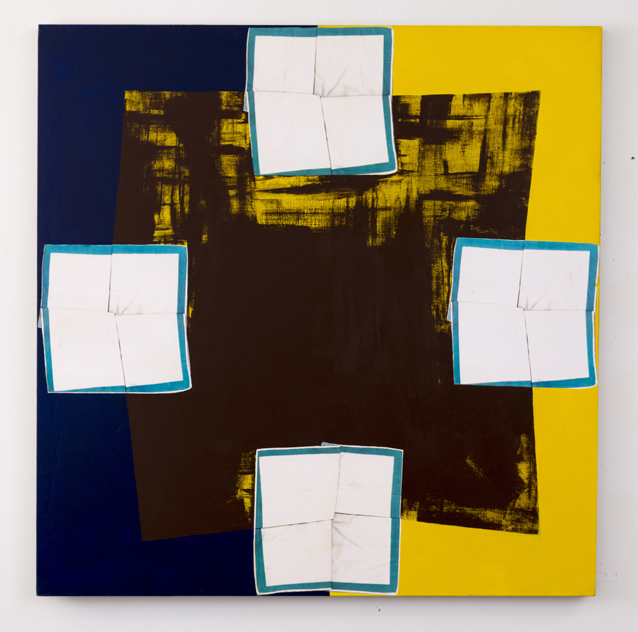 Rochelle Feinstein, Dinner Party, 1996, 106,7 x 106 , 7cm. Öl und Laserdruck auf Leinen. Courtesy Stellar Rays und die Künstlerin.
Make It Behave is the first major retrospective of the work of the New York artist Rochelle Feinstein (*1947). The exhibition was developed in cooperation with the Centre d’Art Contemporain Genève and the Städtische Galerie im Lenbachhaus in Munich and will be presented in 2018 at the Bronx Museum of the Arts in New York. It brings together paintings and series of works from the past three decades.
ADVERTENTIE
inRead invented by Teads
As the title of a work and the exhibition, Make It Behave illustrates the crucial role of language and its normative use in Feinstein’s painting. The work Make It Behave (1990) consists of the gesture of a single stroke of the paintbrush that forms a red square. Who is being told to behave here? What should a “proper” square look like?

With The Estate of Rochelle F. the artist created her own posthumous estate between 2009 and 2010. Inspired by the financial crisis in 2009, Feinstein decided to work exclusively with existing materials. She compiled her own works, everyday objects, and gifts that she once received into a new series. Texts and drawings in the form of journal entries augment the work. By translating the economic collapse into her own activities, Feinstein poses questions about impermanence as well as her own artistic surplus.

Ambiguity and humor accompany Feinstein’s artistic approach. Based on autobiographical experiences, she demonstrates the absurdity of value systems that determine our daily life as well as politics and art history. With an astute gaze, Feinstein questions the formal repertoire of abstract painting as well as her own positioning as an artist and professor within the structures of artistic production and the art market.

Rochelle Feinstein studied at the Pratt Institute in Brooklyn and the University of Minnesota in Minneapolis. She initially worked as a fashion and advertising illustrator before devoting herself to painting in the early 1980s. Since 1994 she has taught painting and printmaking at the Yale University School of Art in New Haven. She lives and works in New York.

The exhibition at the Kestner Gesellschaft is supported by the Niedersächsische Sparkassenstiftung and the Förderkreis + Kunstkomm.