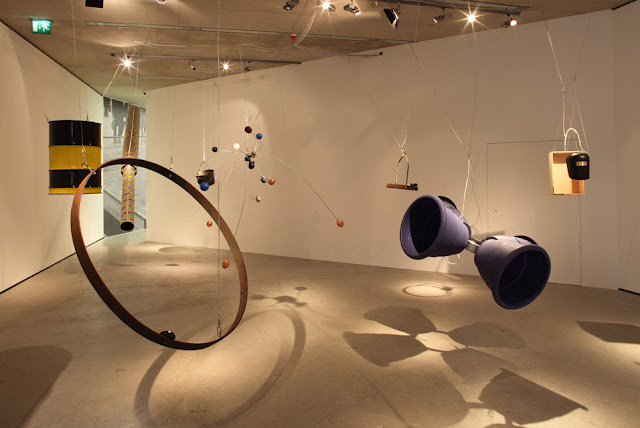 David Tudor & Composers Inside Electronics Rainforest V (Variation 2), 1973/2015 Installation, set of objects, sound library Museum der Moderne Salzburg—Acquired with funds sponsored by the Generali Foundation Exhibition view E.A.T.—Experiments in Art and Technology, July, 25—November 1, 2015 © Museum der Moderne Salzburg, Photo: Rainer Iglar.
In the exhibition Making Spaces in the collection gallery at its Mönchsberg uptown venue, the Museum der Moderne Salzburg will for the first time devote individual spaces to nine artists. Some of the spaces have been designed in close collaboration with the artists. The exhibition Making Spaces. From the Collections presents a total of thirty-five works from the Museum’s collections by nine artists in an area of 8.600 square feet on level [2]. “With unique large-scale works like the installation Rainforest V by David Tudor & Composers Inside Electronics and a group of films together with Fur Wheel, an early kinetic object by Carolee Schneemann, the exhibition will celebrate new major acquisitions the Museum der Moderne was able to make thanks to its partnership with the Generali Foundation,” explains the museum’s director Sabine Breitwieser. Works by Adrian Piper and Harun Farocki, both represented in the collection with a significant group of works in the Generali Foundation Collection, will be complemented with some special loans. The exhibition will open on 22 October 2016, with a collective performance by conceptual artist and philosopher Adrian Piper . My Calling (Card) #3: Guerilla Performance for Disputed Territorial Skirmishes (2012) by Piper will be shown for the first time at the Museum der Moderne Salzburg.

The examination of spaces by artists stands in a long tradition. While the initial focus was on realistic representation, leading amongst other things to the invention of central perspective in the fifteenth century, works in the twentieth century began to directly interact with space. Artists also started to investigate the museum itself and the conventions for observing art. “In the 1960s and 1970s, the understanding space is always the product of social and political negotiations, was particularly emphasized by some artists,” underlines Antonia Lotz, Generali Foundation Collection Curator. That period in particular saw works of art as a critical examination of the museum as an institutional and physical space in which art was collected, presented, preserved, and mediated. Artists problematized the selection, evaluation, and historicization of art. The aim of making art accessible to people of all social classes, regardless of origins, gender, or religious affiliation, reflects the way in which the perception or production of space is linked to social and political negotiations.

The works in the exhibition focus on three themes: (1) physical perception and production of spaces; (2) appropriation, criticism, and modification of institutional and social spaces; and (3) speculative and fictional spaces. The first theme area on the physical perception and production of spaces, will feature works and groups of works by US-American artists David Tudor & Composers Inside Electronics and Carolee Schneemann (1938 Fox Chase, PA, US – New Paltz, NY, US), which are among the latest acquisitions by the Museum der Moderne Salzburg through its partnership with the Generali Foundation and its collection—on permanent loan to the Museum since 2014. The description, investigation, and occupation of space by the human body is central to Carolee Schneemann’s films based on choreographies and performances. The sound installation Rainforest V (Variation 2) by David Tudor & Composers Inside Electronics allows the viewer to interact with the objects and create sound spaces.

The section on the appropriation, criticism, and modification of institutional and social spaces features works by Heimo Zobernig (1958 Mauthen, AT – Vienna, AT), Lothar Baumgarten (1944 Rheinsberg, DE – Berlin, DE), Goran Trbuljak (1948 Varazdin, HR – Zagreb, HR), and Adrian Piper (1944 New York, US – Berlin, DE). Heimo Zobernig questions institutional mechanisms of presentation by undermining the function of the exhibition space through architectural and sculptural interventions. Since the 1960s, Lothar Baumgarten has been investigating ethnographic representation in institutional spaces and criticizes the practice of the museum attributing meaning. Goran Trbuljak demonstrates the traditional expectations with regard to the art system by creating an exhibition situation in which the viewer is confronted with its mechanisms. Adrian Piper’s conceptual works investigate time and space. Her performances in particular highlight the public and cultural space and its criterias for exclusion.

Works by Joëlle Tuerlinckx (1958 Brussels, BE), Maria Eichhorn (1962 Bamberg, DE – Berlin, DE), and Harun Farocki (1962 Novi Jicín, today CZ – 2014, Berlin, DE) open up speculative and fictional spaces. Joëlle Tuerlinckx modifies her works and their installation depending on the exhibition context, thus preventing their historicization and definition. Maria Eichhorn has designed a fictional person for her installation who decides not to open her mail anymore. Harun Farocki’s four-part video installation Parallels I-IV (2014) is devoted to virtual space in the form of a history of computer animation.