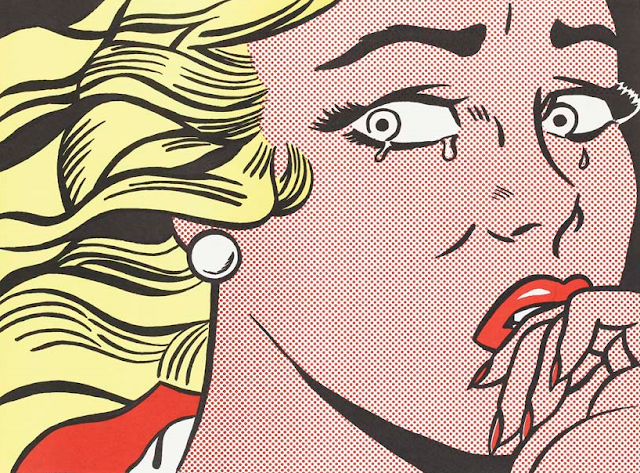 Roy Lichtenstein, Crying Girl, 1963. Photo: Staatsgalerie Stuttgart.
The National Museum’s new exhibition at the National Gallery, “The Great Graphic Boom. American Prints 1960–1990”, focuses on a largely unknown dimension of this American breakthrough, namely its keen interest in the graphic arts. “The Great Graphic Boom” opened on 3 March and will run until 28 May 2017.

With its multicultural society and openness to refugees and immigrants, the United States was in full cultural bloom before, during, and after World War II. This sparked off an innovative creativity that would reverberate throughout the global art scene.

Bold brushstrokes and vibrant fields of colour dominated the abstract expressionism of the New York school. Around 1960, however, many younger artists began gravitating towards other modes of expression and sought out collaborations with various fine-art printers. Pop art found its muse in the era’s popular culture and consumerism, while minimalism reduced everything to a system of repetitive forms.

Works by 23 artists, both well-known and less familiar, are on display. Featured attractions include Barnett Newman’s major Cantos series (1964) and Agnes Martin’s On a Clear Day (1973), as well as Robert Rauschenberg’s use of found objects and Jasper Johns’s reworking of mundane subject matter such as flags and letters. Lithography and silk-screen prints were the media of choice for many artists, while Helen Frankenthaler, Donald Judd, and Brice Marden explored older techniques such as woodcuts and etching. Roy Lichtenstein’s famous Brushstroke is a natural inclusion here, as are Andy Warhol’s portraits of Elizabeth Taylor and Jackie Kennedy. Other highlights include Warhol’s Campbell’s soup cans and Louise Bourgeois’s Ste Sebastienne.

The exhibition has been curated by Øystein Ustvedt.