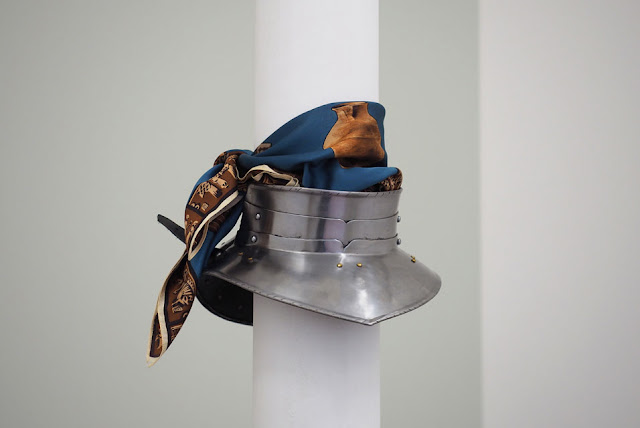 Maria Loboda, Young Warrior in the Landscape Watching the Birds Go By (Pastoral), 2017, in Havoc in the Heavenly Kingdom, Kunsthalle Basel, 2017.
Pay attention to her titles. There is subterfuge in Maria Loboda’s use of language and in her deployment of stories at once obscure, magical, or strange in the making of her art. Their historical exactitude is largely ir- relevant; what matters is that they circulate and in so doing tell us something about our desires, fears, pasts, and potential futures. As a student, the artist’s first public presentation was an assembly of rather ordinary items, including white wood, verbena, fine steel, goatskin, and green ribbons. But its title, The Evocation of Lucifuge Rofocale (2004), meant that visitors who read it inadvertently found themselves calling forth the dark lord in a room full of all the items from the classic demonological recipe to summon him. The project revealed the artist’s persistent fascination with how mere things can be bestowed with a mysterious and auratic force.
What better way, after all, to describe that numinous thing we call “art” than to realize that besides kings and priests and bankers, artists are perhaps the only beings with the power to give value to things that ostensibly have none? Loboda does just that, rendering strange and unforgettable her combinations of willfully austere or simple-looking objects by layering them with encrypted backstories culled from the likes of obscure military treatises, alchemy, mythology, the occult, and museological research. Her tactics are neither nostalgic nor merely referential; rather, she transforms her findings into sculptural and photographic works whose force lies beyond any surface aesthetic appeal.

STAIRS AND LANDING
Loboda has lined the entrance stairs with a sisal runner that leads to Young Satyr Turning to Look at His Tail, a plaster pillar fitted with a satyr’s tail. Its title references a Roman imperial copy of an ancient Greek sculpture, which in Loboda’s hands becomes a cipher for vanity, decadence, and fallen civilizations. The runner that gives prominence to the piece is entitled (loosely borrowing from the 1909 Futurist Manifesto) Trample Your Atavistic Ennui into This Sisal Rug, and is held in place by metal stair rods that conceal any number of items slipped between them that were thought in ancient times to ward off evil. It is the first clue in Loboda’s exhibition that one thing can hide another, and a sly announcement that each element in her installation hovers between mystery and evidence, occultation and evocation.

ROOM 1
In the central space of the exhibition, three monumental gates, Hypothetical Reconstruction of a Gateway (V, VI, VII), in various geometric formations, are inspired by the ancient gates of the temple complex of Karnak. Here they signify hypothetical splendor, creating a space of sacred presence, hinting at the long-gone inhabitants who left behind clues to their eccentric existence. Each is painted with a different approximation of the color celadon, typically used as a ceramic glaze for the service of royalty and once thought to calm troubled souls when gazed at long enough. This color that ancient Chinese artisans regarded as “beyond description” is almost impossible to precisely replicate. Inscribed on one gate is a note that points our attention to the third gate’s ledge, where a glass vessel contains a flammable substance and cloth wick, a common do-it-yourself weapon used by rioters, anarchists, and gangsters. This incendiary weapon perhaps reminds us that at the threshold of any great civilization is the power of revolt.

The walls around the gates feature a series of closely cropped, large-scale photographs showing the pants cuffs and shoes of a well-dressed man, perhaps an investment banker or politician, carelessly dirtying his finery in filth and mud. It may be a metaphor for the ways in which those in power reach it through any means. The series is entitled The Evolution of Kings, after an ethnological study of magic and religion that traces the evolution of not only kings and gods, but also sacred and taboo objects—a study that inspired the artist throughout the show.

Appearing as if by divine intervention high above the exhibition’s central gallery is Raw Material Coming from Heaven, a copy of a 1578 fresco whose origins are unknown, discovered in the 1980s in the Bernardine Church in Vilnius. Seemingly haphazardly drawn onto the arcs of the church’s pillar, the awkwardly formed and almost pagan-looking symbol acts as the blackest eye looking down at churchgoers. Here it emanates from a corner of the exhibition, looking down upon Kunsthalle Basel visitors and brandishing magical, pagan properties.

ROOM 2
A back room contains a large-scale work entitled Two Idiots Engaged in a Game of Chess, representing an image found on an Egypt Papyrus dating from 1186 to 1069 BC. The image satirizes society and human activity, showing animals in reversals of the natural order: a lion and a strange hoofed creature playing a board game. In Loboda’s version, the image is spread across multiple broken plaster relief fragments that look like excavated archaeological artifacts from an ancient civilization—or perhaps our own.

ROOM 3
In the smallest gallery is a high pillar, titled Young Warrior in the Landscape Watching the Birds Go By (Pastoral), anointed with an element of a metal armor and a delicate silk scarf—a reminder that a reflection on war and power underlies Loboda’s cryptic unraveling of our present.

What does it all mean and how does it add up? Extending an exploration of the archaic, the mystical, and the transcendent that has preoccupied her throughout her career, Loboda instills each object in her exhibition with a witchy presence, but rarely leaves us with unequivocal answers about their meaning. And despite the magnitude of the subjects she might address, she maintains a light touch, finding humor in how the arcane can speak to us today. For there is “havoc in the heavenly kingdom,” as her title announces from the start, taking its name from an ancient Chinese myth of Sun Wukong, known as the Monkey King, who is allowed into heaven to better be controlled, but in turn creates mayhem—a veritable metaphor for our present moment. But it also suggests that art and politics are never far apart. If the exhibition is heaven, artists are the divinities that we invite in and who channel chaos, all the better to reveal the power structures that actually order the universe.

Maria Loboda was born in 1979 in Kraków, PL; she lives and works in Berlin.