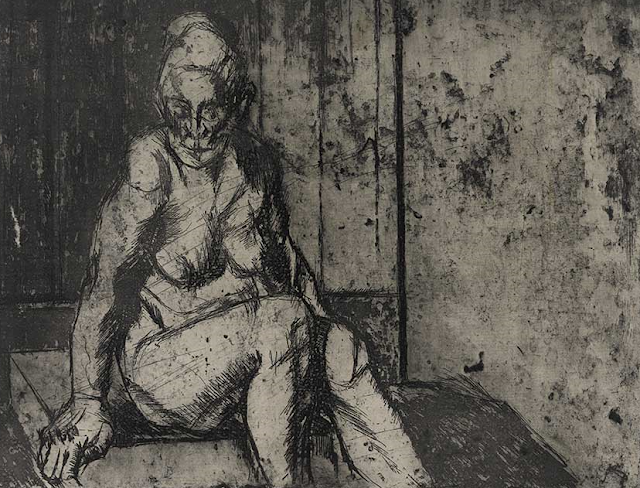 Seated female nude, 1963. Etching. 24.5 x 32.54 cm, Maggi Hambling © The Trustees of the British Museum.
Maggi Hambling is one of Britain’s foremost contemporary figurative artists, working across all media, in painting, drawing, printmaking, sculpture and installation. However, drawing is at the heart of her practice and is of fundamental importance to her. The exhibition takes its title ‘Touch’ from this concept of a deep connection with the subject being drawn, as Hambling says: ‘I believe the subject chooses the artist, not vice versa, and that subject must then be in charge during the act of drawing in order for the truth to be found. Eye and hand attempt to discover and produce those precise marks which will recreate what the heart feels. The challenge is to touch the subject, with all the desire of a lover.’

Born in Suffolk in 1945, Hambling studied with the artists Arthur Lett-Haines and Cedric Morris from the age of fifteen and later at Ipswich Art School, Camberwell and the Slade. Although she is perhaps best known for her controversial public sculpture: Oscar Wilde (1998, facing Charing Cross Station, London) and Scallop, (2003, Aldeburgh Beach, Suffolk), Hambling’s powerful drawings and monotypes are less familiar to the public.

The British Museum was the first national institution to collect extensively Hambling’s works on paper. In 1985 the Museum acquired the drawing of her former teacher Cedric Morris on his deathbed. Hambling’s first series of monotypes, sensuous studies of the nude, were purchased soon after and the Museum has continued to collect her work. This exhibition will examine Hambling’s drawings and prints, many of which have never been exhibited before, from early student drawings and etchings, to portraits of artist and critic John Berger, actor Stephen Fry, and curator Norman Rosenthal.

Hambling has spent time over the years in the British Museum Study Room examining the work of Michelangelo, Rembrandt and Van Gogh. As she says, ‘It is an exhilarating sensation to actually handle a Van Gogh drawing because drawing is the most intimate thing an artist does’. The show will mark a major donation by the artist of around fifteen of her works. 2016 is the bicentenary of Francis Towne’s 1816 bequest, which established the tradition of artists donating their works to the British Museum. Maggi Hambling’s gift will be the latest manifestation of that tradition.

‘Touch’ will consist of forty works, around a quarter from British Museum’s own collection, with loans from private collections, the National Portrait Gallery and Tate. The remaining works will be from Hambling’s personal collection,

The exhibition will begin with a life size and striking charcoal portrait of the writer, artist and Soho dandy Sebastian Horsley, who Hambling has described as ‘an exotic wild animal’. He is drawn wearing nothing but a silk scarf and introduces one of the major themes of the show, the human form. The exhibition will continue with a display of some of Hambling’s earliest work from the 1960s and 1970s, including the powerful ink drawing of Rosie, the stuffed Indian rhinoceros in Ipswich Museum, which she considers ‘her first portrait’. Executed when the artist was seventeen, this work already shows the commanding skill that would progress and evolve throughout her celebrated portraits and paintings of the sea. The exhibition will conclude with recent work made in 2015, from a new series entitled Edge which, in this instance, addresses global warming.
Website : British Museum
Source : Artdaily